A Vanilla Kind of Guy

I was suspicious when he ordered vanilla in Baskin Robbins. "Vanilla?", I queried. "Don't you know where you are?"  He responded, "I'm a vanilla kind of guy." Red flag, big one; for me at least.  I'd try muddy water and fish eyeballs if they were on the menu; something different in my quest for salavary sensations.  I remember my very first visit to Baskin Robbins, where I ordered Pumpkin flavor ice cream.  It was a revelation of sheer genius to my adolecent mind.  I'd never encountered any store bought flavors beyond vanilla, chocolate and stawberry and on a few rare occasions, someone made homemade peach in the summer.  I couldn't imagine this guy didn't have the guts to, at least, try mocha almond fudge or cherries jubilee but, this was a man who held the record for "Most Bowls of Ice Cream" at his summer camp, every one of them vanilla.  How boring. Vanilla was no adventure, it's like playing in your own backyard.

Then he turned the tables on me and asked if I wanted to go camping.  Who, me? That meant I had to wear something besides a dress and cute flats. I actually showed up in a dress and flats, in mock protest, thinking he'd get the message.  Much later, that day I found myself tight rope walking across a fallen tree over a rushing creek to a remote campsite somewhere in the hills of North Carolina - in the pitch dark.  I awoke at dawn, screaming when a stray dog decided to sniff my sleeping face.  He cooked pancakes in a foil pan for breakfast over a campfire. They stuck to the pan and burned, but it was love and I saw my mission and I think he saw his.

When it comes to expanding his culinary horizons, olives are where he draws the line.  There's no discussion about, "just taste it".  I've tried to sneak a few into sauces, then pick them out of his serving, but he knows.  "You've put olives in this."  It might as well be arsnic.  He doesn't have much use for raisins either and simply tolerates the copious amount of fresh herbs I use in everything. Herbs are pretty hard to get around if you take cooking seriously. For someone who thinks peanut butter on graham crackers is sublime,  I've done my best to exercise his underdeveloped tastebuds into maturity.  I think we're getting somewhere after all these years.  He complimented my watermelon-raspberry sorbet (with a hint of chocolate extract) as "complex" and I've come to agree, simple, unadorned vanilla ice cream is the best all rounder.

Over thirty six years of getting used to each other's likes, dislikes and tastes, we've eaten quite a few meals together. The picture here was taken last summer as we finished a memorable dining experiences at Chateau Eza in the romantic, magical village of Eze perched along the Riviera.  The view is stunning and the food is too fine to discribe here.  It's my kind of place and we where truly living in the moment - a memorable one.  This summer, we're going to Alaska, his kind of place.  Salmon fishing, watching bears  and hiking volcanos will be involved and I'm wondering what kind of horizons he'll expand for me and what moments we'll be living in.  It's for sure, I won't be packing a dress. 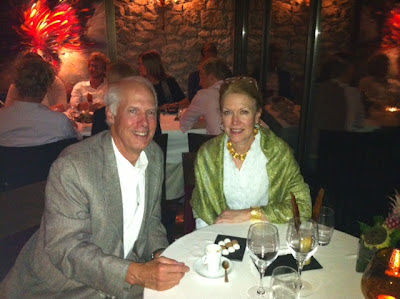 Posted by Recipes & Random Thoughts at 7:14 AM No comments: 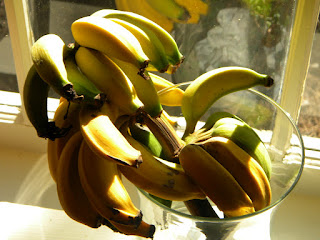 I've been waiting weeks for these little green dessert bananas to ripen.  I was just about ready to give up on them when, suddenly, they finally, turned yellow. Dessert bananas are an exotic mini version of the larger variety and perfect for the title "dessert".  They are about 3 cute inches long when pealed and are a sweeter flavor than what I'm familiar with.
I found most recipes reflected a Thai, Cambodian or Vietnamese origin and paired them, frequently, with coconut.  I decided to go whole hog and batter dip, roll in coconut and fry them.  How often do these cute little 'nanas come my way.  Give them the deluxe treatment and show them the town.  Frying takes some skill,so please note, coconut burns very quickly.  My test banana crashed and burned, so give yourself some lea way. The finished banana can be simply dusted with powdered sugar, served over ice cream or, I think, when serving these again,-rum sauce over ice cream would be my preference.
How often do these sweet little guys come to dinner ?!

Mix milk, egg and flavorings together separately. Slowly whisk liquid mix into flour. Coconut should be in a separated shallow dish,  Dip pealed banana in batter then roll in coconut.

Heat 1 inch canola oil to 350 degrees in a 10 inch skillet. Fry, turning quickly and drain on paper towels. Serve immediately as you prefer. 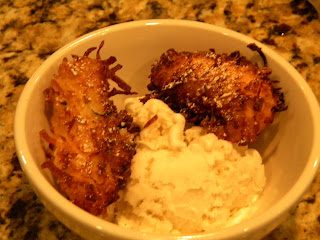 Posted by Recipes & Random Thoughts at 3:38 PM No comments:

Who's Your Daddy? Watermelon Salad

I was in a check out line at the grocery store on Saturday before Mother's Day.  The man in front of me was buying flowers and a card when the clerk suddenly said, "Everybody does something for Mother's Day, but nothing for Father's Day.  In my neighborhood, don't nobody know who their daddy is."  That statement said volumes about modern culture, but I'm not going there.

I know who my Daddy is and I'm having a barbecue today in honor of all the fathers in our extended family including my son who is an expectant father.  We're enjoying a beautiful day and thankful for the fine men who have provided for us and nurtured us through the years. 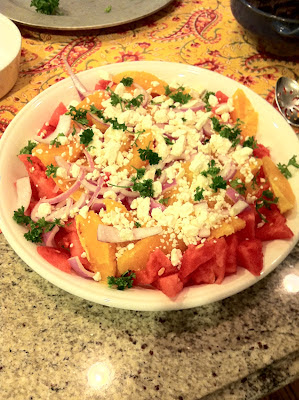 Watermelon Salad, a relatively new creation, is a big hit in the hot summer month's.  It's a cool balance to the smokey, piquant flavors of barbecue  My cute little 6 year old great niece helped create this version.

Email ThisBlogThis!Share to TwitterShare to FacebookShare to Pinterest
Labels: salads

I think pickles are generally, overlooked or looked down upon. They are another item my children "eehweed" but later acquired a taste for. It takes some maturity to appreciate a good pickle. They are meant as a compliment to a main item but may be served as an hors d'oeuvre.  Think of them as the right pair of earrings or scarf to accessorise an outfit.

I'm getting geared up for the Father's Day Barbecue Sauce Event and a really good barbecue sandwich deserves a really good pickle to top it off. I like mine with some heat and a little of everything.  This is another "make it your own" recipe, but what's really important here is the brine proportions, after that, add your favorite ingredients.  Here's what I put together for this weekend's event.  The Dad's like 'um hot. Use 2 tbls pickling spices as a short cut, if you prefer. 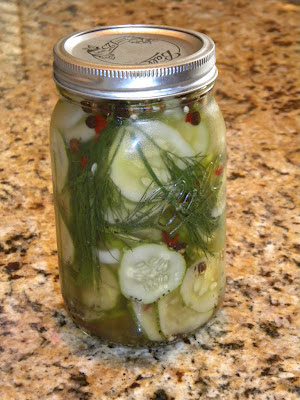 Combine the vinegar, sugar, salt a quart jar..  Place the lid on and shake until the sugar has dissolved.
Add the spices and garlic to the brine. Shake, shake, shake.

Layer the cucumber, onion, jalapeno, dill fronds in the jar packing them down tightly. Press down with a wooden spoon.  Refrigerate 4-5 days, shaking each day. Keeps about a month in the refrigerator.
Posted by Recipes & Random Thoughts at 5:03 AM No comments:

A few years back, I decided it would be fun to have a barbecue sauce contest at the family gathering for Father's Day.  My eldest son was really into the barbecue thing so having everyone bring their own concoction of sauce to go with the meat has made for a lot of fun. I'll be the Pit Mistress and each participant must bring their homemade sauce in a jar, secretly marked A,B C etc.  Then my Dad is the judge, tasting and grading each sauce on a variety of merits.  I guess I got the idea from watching all those barbecue competitions on TV.  My talented daughter-in-law is the reigning champion.

Putting a sauce together isn't as complicated as smoking the meat; sauce has endless variations.  Ketchup and vinegar seem to be the most common ingredients, but as you know, mustard and brown sugar are popular too.  The religion of barbecue has many denominations and there are quite a few published "bibles".  There's ketchup base, mustard base, vinegar base, bourbon, coffee, sweet, hot, chili, molasses, brown sugar, Asian, Hawaiian, Korean, Brazilian, Texas, Memphis, Carolina and Kansas to name just a few.  Everybody seems to get into the creative aspect and it can get pretty experimental with weird ingredients  thrown in.  So 'n so's "original" sauce has a new meaning but the main ingredient is fun.  There's something new out of Alabama called "the white sauce".  It's mayo based and my son says it's quite good.  I'm thinking I'll do some homework on that one for the contest.  Somebody send me a recipe if you've got it.

The history of barbecue is as various as the types, but it comes down to meat cooked slowly over low fire (fuel varies) and barbecues have always been social events, remember Scarlett and Rhett first met at a barbecue.  The historical image I prefer, is the Outer Banks of North Carolina. Pigs where plentiful and low maintenance animals that where slowly cooked with the only condiments available; vinegar, salt, pepper and mustard. Mustard based sauce is native to the Carolina's but the recipes vary county to county.  Barbecue shacks are tucked away on back roads and there have been quite a few magazine articles recently on the "barbecue trails" in the South.  Sounds like a fun road trip to me.

I just wish I had one of those fancy automatic smokers.  I'll be sweating it out with the best of the Pit Masters next weekend.
Posted by Recipes & Random Thoughts at 12:40 PM No comments: 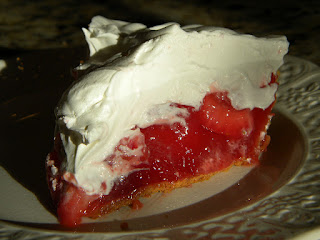 The Hemlock Inn in Bryson City, North Carolina is know for it's home cooking served family style at big round tables with Lazy Susans.  No TVs, no phones, no AC, just some seriously good food, friendly , wholesome atmosphere. I've spent many happy family occasions there over the years. They published a cookbook a while back and I've used their Strawberry Pie recipe too many times to count. My son and I had an agreement, when he played Little League, if he hit a home run, I'd make him a strawberry pie.  There were a lot of home runs and a lot of love in those pies. A quick and easy classic.