A Rehearsal Dinner in the Rockies, Elk & Trout 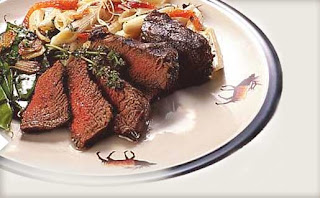 My youngest son was married in the majestic Rocky Mountains of Colorado last weekend.  After months of planning, endless lists, hundreds of emails, miles of travel, and fervent prayers over the weather; a triumph of love emerged.  At times, the logistics and budgets cramped me but the one thing I saw clearly from the start was the rehearsal dinner menu.  Weddings and all that goes with them have evolved into more regal affairs than when I married in 1976.  Thankfully the era of receiving lines and Fellowship Hall receptions where over. My wedding was the full enchilada of the day with a cathedral train, white tie and tails at 8 pm, open bar and sumptuous buffet at a private club. The rehearsal dinner, however,  was a prim affair with only champagne punch to toast with.  It was a time when the groomsmen made every effort to embarrass the bride and groom but due to the lack of alcohol, we where saved.  I was in such a state that night, I broke out in hives.  Not so with this bride. She was a poised luscious confection worthy of dessert.  She arranged the seating of 154 guests with  all the diplomacy of a White House or Buckingham Palace state dinner. 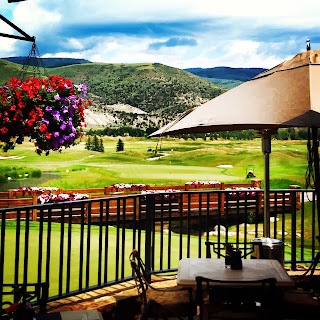 As tradition has it, a meal following the wedding rehearsal falls to the groom's side of the aisle.  I had to pick the site fairly blind but on good recommendation. So back in February, we made one pilgrimage to Beaver Creek, Colorado to survey the situation and have a "tasting" at the restaurant of choice - Vista.  It's a ski resort and naturally there was a lot of snow on the ground and everywhere else. I was suppose to imagine what it looked like in late August when the doors to a broad terrace off the main dining room would be open and overlook a valley golf course and a view of a mountain range and lots of flowering plant beds.  Couldn't see it at the time, just snow and a grey sky. We talked table arrangements, seating and other stuff.  It was all pretty fuzzy until we sat down to sample what the chef had to offer. Then I could begin to see it.  I guess I think and see with my stomach.

The passed hor d'oeuves had many options but we settled on 3 items that where very tasty and easy to handle for the guests, fried goat cheese and marscapone served in amuse bouche spoons, little crab cakes and bacon wrapped dates stuffed with blue cheese. My son and I sipped and selected various wines. Presseco would be offered to toast the young fiancee's following entree.  Each table would be served a selection of petite sweets to nibble as the toasting commenced.

I wanted to make my statement (if that's plausible) with a "surf & turf" style entree of local fare.
Elk & ruby trout where not on the main menu but the chef was agreeable to my suggestion. I always think "when in Rome" as I travel.  The bride is a sushi aficionado (see 1/29/13 post; "Becky Goes to Sushi School") but I wanted selections that represented a more masculine presence. No puff pastry or Bearnaise sauce tonight.  Simple, elegantly prepared food complementing  the setting. Elk tenderloin is tender, no gamey taste, has more protein and less cholesterol than most red meats. The "ruby" of the trout come from the fish being fed on small crustaceans, not the bad stuff. These where relatively healthy choices.  What I enjoyed the most was the captured audience trying something new, different and delicious. The chef did a great job with a pan sear and a little time in the oven for both items. Garlic mashed potatoes and jumbo asparagus rounded out the plate.  Even if I didn't cook the meal myself, I took satisfaction in the compliments of selection.

In my opinion, it was a great success or maybe I had too much wine. No matter, the elk surprised and pleased as did the ruby trout.  The wine flowed and the toasts ranged from hilarious to teary eyed touching, The staff said they were the best toasts  they'd ever heard - and they said they had heard a lot of them. The next morning I woke in a blur failing to remember much detail for a while but still vibrating with  happiness and knew it had gone well.  My husband, greatly relieved he had delivered his speech ,was found in the sauna the next morning with an ice cap on his head and cucumbers over his eyes. He had accomplished his mission without fuel and then made up for it afterwards.

The bride and groom are honeymooning on the Amalfi coast and Paris.  Stay tuned as they report on their dining experiences. BTW, this is my 100th blog.
Posted by Recipes & Random Thoughts at 6:20 PM No comments: 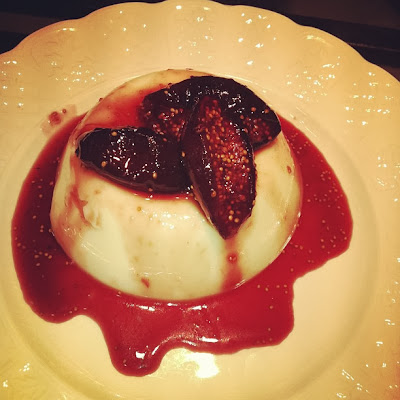 I cannot pass up the chance prepare something special with figs. They are a luscious and versatile summer fruit that can be found on everything from pizza to oatmeal right now.  I really like them best fresh but  they pair so successfully with savory cheeses and greens like arugula.  It's hard to know which way to turn but I've decided to ramp up all their rich sweetness by caramelizing them and adding a dash of  elegance with Moscato D'Oro and then serve over a more piquant buttermilk panna cotta. The ruby color from the figs is lovely. Opposites attract in this romantic dessert. Heavenly!

For the Caramelized Figs D'Oro

In a heavy medium sauce pan, add the brown sugar, Moscato, salt.  Cook over medium low heat for ten minutes stirring frequently. Do not let the sugar burn.  Add the lemon zest and figs and cook another 10-15 minutes.
Cool and serve at room temperature. Store in glass jars.

For the Buttermilk Panna Cotta

Sprinkle the gelatin over the water in a small bowl and let it bloom for a few minutes
Lightly spray 3/4 cup custard cups or molds with cooking spray and set aside.

Heat the cream, sugar and lemon peel in a heavy medium sauce pan over medium heat stirring constantly until the cream just starts to boil. Remove from heat and let cool for 10 minutes. Add the softened gelatin and stir until dissolved.  Add the buttermilk and vanilla and blend.  Pour into cups and chill for at least 4 hours.
Posted by Recipes & Random Thoughts at 2:24 PM No comments: 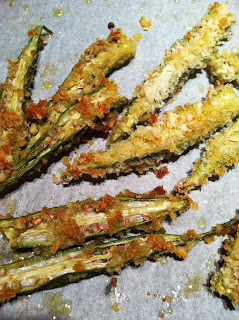 Outside the south, okra isn't truly appreciated.  It's a southern staple in our summer gardens.  My husband remembers eating it every night when it arrived in abundance much like the squash and string beans that seemed to go on endlessly at my home.  Small pieces of fried okra where kin to popcorn but okra is more often found in New Orleans style gumbo or stewed with tomatoes and onion.  The slimy texture, when cooked in a liquid acts as a thickening agent. I guess it's an acquired taste if you didn't grow up with it.

Here's a lighter oven baked version of the classic fried okra.  Try it, you'll like it.

bake at 350 degrees for 20-25 minutes until browned. sprinkle with Kosher salt when hot and serve immediately.
Posted by Recipes & Random Thoughts at 4:55 AM No comments:

Email ThisBlogThis!Share to TwitterShare to FacebookShare to Pinterest
Labels: Vegetable

Food on the Fast Track

Most of the time, I can prepare a meal fit for a king from the stock of my pantry, frig or freeze. When I consider my children and their contemporaries, who's lives' are hectic and filled with something to do besides making homemade chicken stock, I wonder what would I do in their situation.  Cooking homemade meals has always been a priority for me, not so much for them, but I sense they still want a high quality of domesticity.  They may not derive as much satisfaction as I do from making all my own salad dressings, stock or bread but they certainly appreciate the comforts of home cooking.  So how do they strike a balance between a week on the road, graduate studies at night, and nonstop busy, busy, busy - not to mention, babies.  Whew!  I've never forgotten the night, early in my marriage, when I came home whipped from work at midnight and my husband who was studying for graduate finals said, "What's for dinner?" Our future depended far more on his education than my job as a paralegal, so I fixed something - but, I always had something to work with in my kitchen even back then.

I think about the younger generation of my family and how accomplished they are. None of them are slack; they are all highly educated, motivated, capable and have very serious careers in education, medicine, business or art. I'm so proud of them.  The only thing they lack when it come to cooking is time, but time is the essential element. They have different priorities and just need a plan and some good tools for a little home cooking .

Microwaves are standard equipment now, but there are some other very good small appliances to facilitate their situation.

Kitchen Equipment beyond spoons and spatulas:

Consider something like a slow cooker when you get a wedding gift for a busy young couple. It may be far more useful than a napkin holder.


Posted by Recipes & Random Thoughts at 4:44 AM No comments: