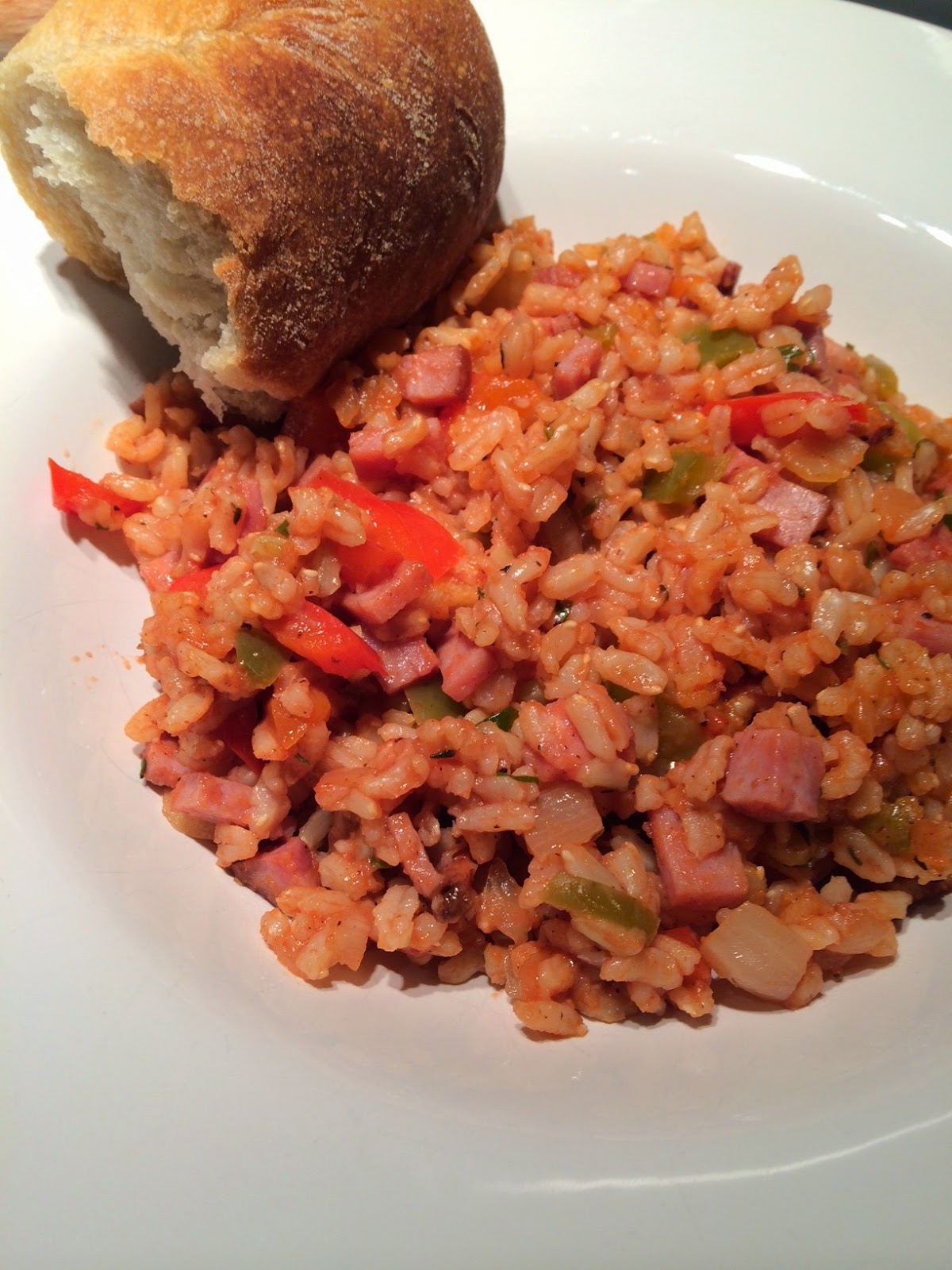 While visiting my aunt in Charleston, South Carolina, I was anxious to retrieve the recipe for a dish my grandmother often made,  Rice Perloo (pronounced perlow).  Rice is the staple dish of the Low Country and was served at breakfast, lunch and dinner at my grandparents' house in Summerville, a picturesque town 25 miles inland from Charleston.  It is a versatile dish that can utilize seafood, vegetables, bacon and ham.  Perloo is a kin to other rice dishes like pilaf and paella and has its' heritage from the Mideast.

My grandparents where simple folk and my grandmother had to stretch a dollar during the Depression to feed a family of seven.  Her version was very simple.  Boil a ham, then use the broth to cook the rice in. She sauteed onion, added the rice and seasoned in with salt and pepper and then the chopped ham.  When we vacationed at the Isle of Palms, the recipe evolved to "Red Rice" with green pepper, celery, tomatoes and was seasoned with Worchester then shrimp was added.  That was a real fine meal after a day playing in the surf and building sand castles.

There was no written recipe with measurements.  My grandmother measured the correct amount of water for rice by sticking her finger in the pot to see if it reached the middle joint of her index finger.  She probably never owned measuring cups and spoons, just cooked by site and feel.  I'm pretty good at "guessing" measurements but not that good.  She managed to feed her family the best way she new and it always tasted fine to me.

This isn't true to her method but I think she would enjoy it.  It's sooo good!

1 cup long grain white rice
1 cup water
1 cup chicken stock
1 tsp salt
1 tsp butter
Put all together in a pot and bring to a boil, cover and let cook until all the liquid is absorbed. About 25 minutes.

In a large skillet cook 2 slices of best thick cut bacon over medium heat until brown and all fat is rendered.  Remove bacon and reserve 1 tbls fat.

Cook 10 minutes over low heat until liquid is just absorbed(for shrimp, add at the last and cook until just pink)

Posted by Recipes & Random Thoughts at 5:52 PM No comments:

Email ThisBlogThis!Share to TwitterShare to FacebookShare to Pinterest
Labels: Rice

Butter - Hell No, I Ain't Fergittin 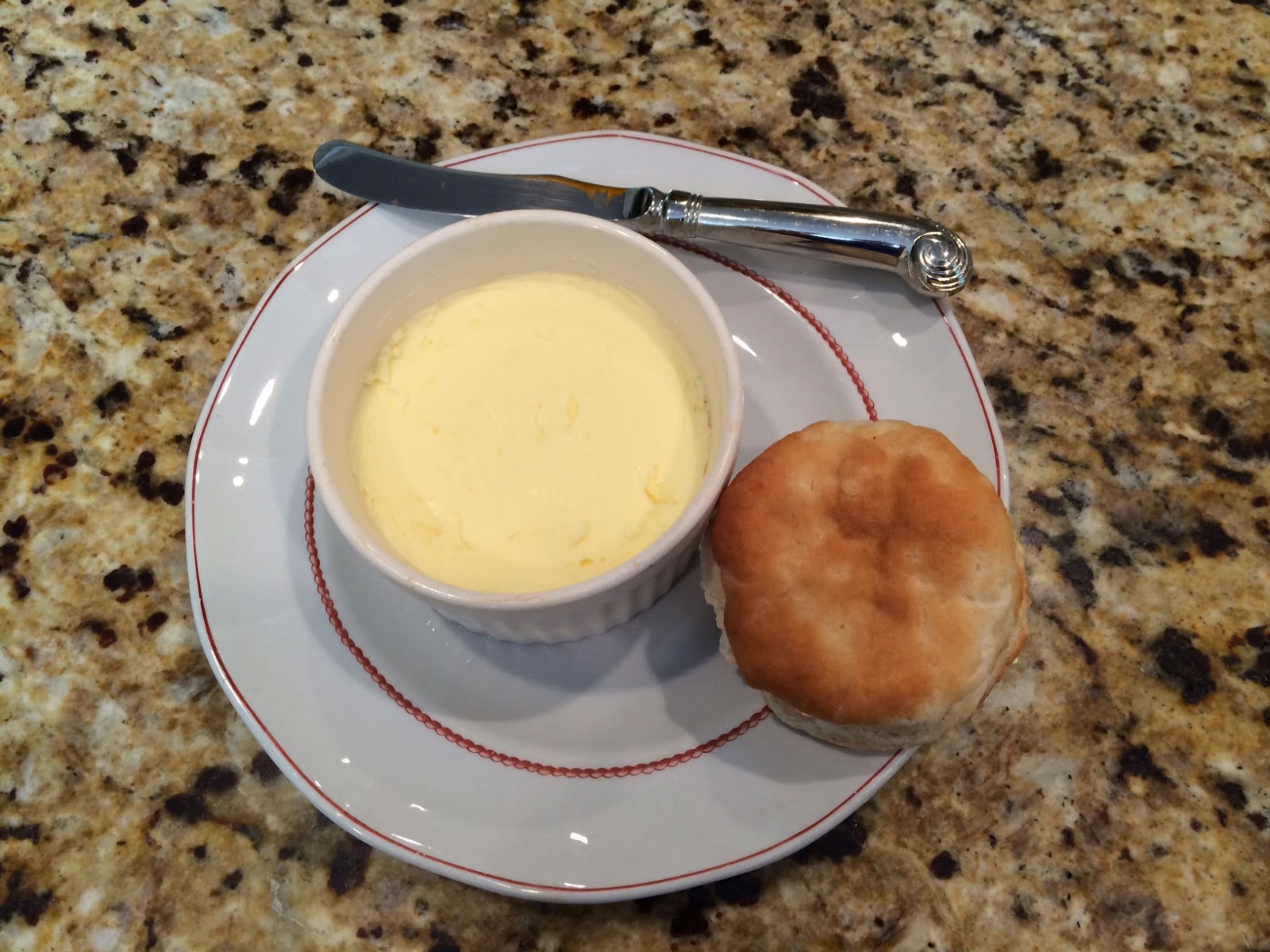 When I was a child, the story was repeated to me a number of times by my great grandmother, grandmother and mother, How my great, great grandmother, widowed and pregnant with my great grand mother, begged the Yankee soldiers to leave her the spinning wheel and butter churn as they burned the house and the crops to the ground and confiscated the live stock. Was she just asking for anything in a chance to survive? It's the butter churn that bothered me. If they took the cows and live stock; no milk and consequently no butter. I began to wonder, if I where in the same position today, what would I ask them to spare?  My Cuisinart food processor, my Kitchen Aid Mixer, my exquisite collection of cast iron cookware, my Wusthof knives or just a spoon and a box of matches?

So it caught my attention in the booklet that came with my new Vita Mix, that butter was something you could make with this rather expensive apparatus. Well, like most, I buy butter at the grocery store but I remember as a child that crazy delicious sweet whipped butter that strangely appeared when my grandparents where around. How did that happen?

If you are a real cook, heavy cream finds its' way into your refrigerator and after you've used the tablespoon or two for a recipe, you have to figure out what to do with the rest.  So I poured some leftover cream into the Vita Mix and hit the button. Voila! Once it separates, whipped butter.  Strain off the liquid and add honey or whatever. Imagine the possibilities! I guess this might be the essence of what I like about cooking and this blog.  You CAN make things yourself that are better than store bought or restaurant food. It only take a few minutes before you can spread your butter on some warm toast or a muffin.  How easy can it be.
Posted by Recipes & Random Thoughts at 8:23 AM No comments: 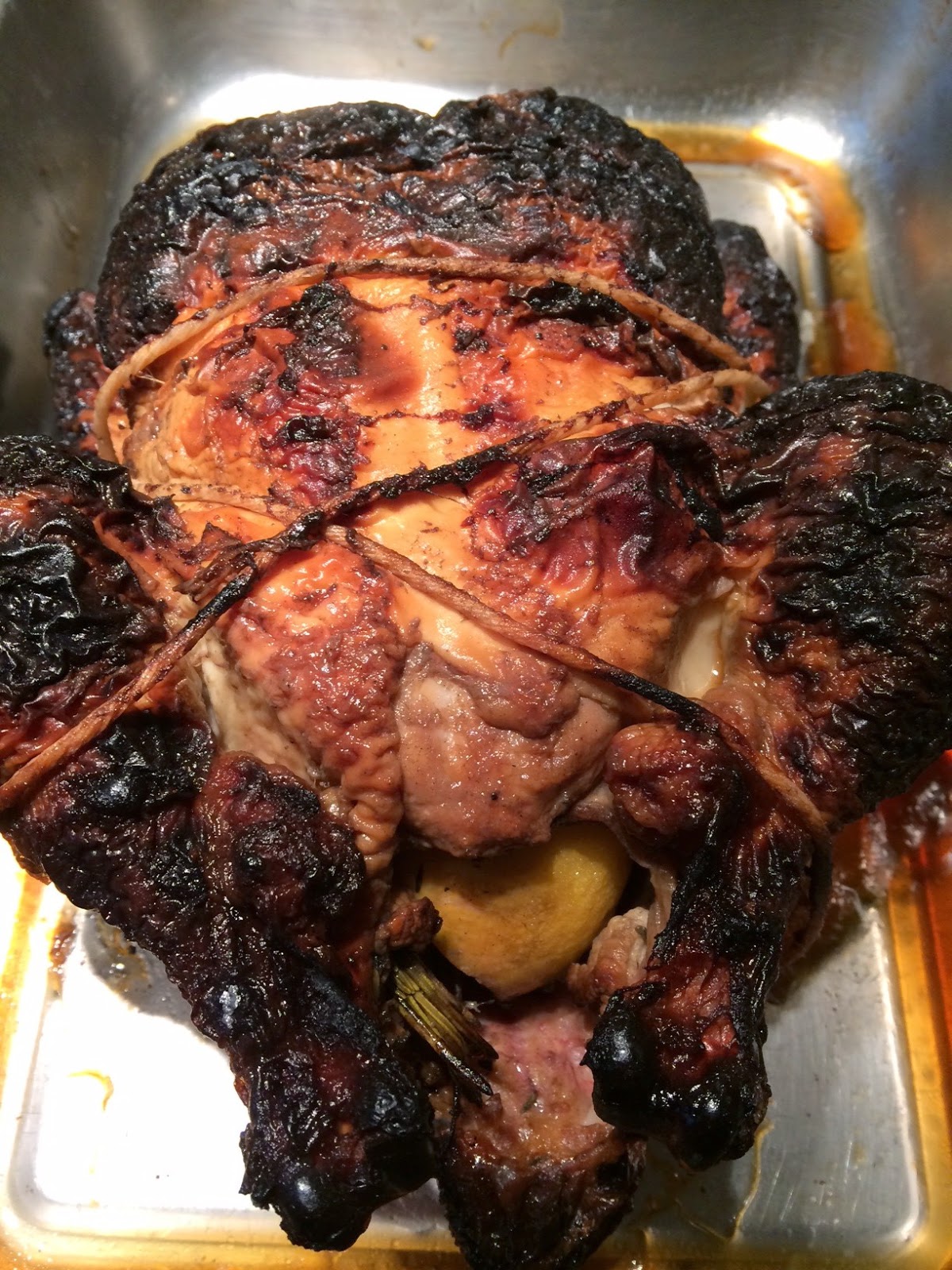 I had some fabulous grilled whole chicken at a pool side party recently and tracked down the brine that made this memorable.  I thought I'd like to do this on my rotisserie but if you don't have one, butterfly the chicken and put it directly on the grill grate over indirect heat.  This is enough brine for two whole chickens to be submerged. If you don't have a large container use a heavy duty garbage bag.  Be sure to keep those marinating chickens refrigerated (40 degrees F.) until ready to grill.  The sugar will make a dark skin, don't worry it's delish!

Combine all ingredients in 6 cups water and bring to a boil.  Add 2 quarts ice water to cool. Submerge chickens and refrigerate for 48 hours.

Check cooked chickens internal temperature in the thickest part of the breast for 160 degrees. I tie my chickens with butchers twine but another check for doneness is to wiggle the drumstick

Posted by Recipes & Random Thoughts at 3:53 PM No comments: