Foodways, the Crossroads of Culture

I recently watched a documentary produced by the University of Mississippi for the Southern Foodways Alliance.  They are a nonprofit academic organization devoted to the study and preservation of a diverse and changing Southern culture.  The term foodway refers to the intersection of food with culture, traditions and history and the most common thread of Southern culture is food.  The documentary entitled, Pride and Joy, created by Joe York was six years in the making and is a series of short intimate interviews with Southern individuals who have a particular niche in the traditions of Southern food.  I'm impressed with the film.  It is one of the more insightful and amusing things I've watched recently and I want to join the SFA's ranks.


I have a pretty broad palate but, like most, I return to my roots for my favorites partly because it's in my blood.  The French have soufflé's and sauces, the Italians have pasta and pizza, the Greeks have olives and Baklava, the Asians have rice, the Indians have curry.  Every culture has its cuisine and I try to appreciate them because it's an obvious way to get to know a people besides a handshake.  The South has fried chicken, biscuits, grits, greens, sweet potatoes, hushpuppies, black eyed peas, Cajun, Creole, AND all things pig - BBQ, bacon and even pig's ear sandwiches.  All washed down with sweet tea or perhaps a sip of bourbon.  Who couldn't find something to love here.

The history of Southern cuisine owes much of its distinction to the slaves and Native Americans synonymous with its history.  Pilgrims and early settlers couldn't have survived without some pointers on corn from the Indians and the slaves brought from west Africa many plants, seed and ancient cooking techniques that formed the southern table.  A moderate climate and a coastline teaming with fruits of the sea offer unique elements bound for glory.  I'm not sure why Southern food was ever beneath others on the culinary ladder for so long except a hangover from the stigma of Civil War and Civil Rights. This is all enough for the SFA and its scholars to examine throughly and bring us up to date.

Mr. York spotlights the standard bearers of tradition in some of the most out-of-the-way places imaginable.  The legendary Alzina Toups' restaurant is a welder's shed converted to kitchen on a hard to find dirt road in the Louisiana bayou. She rides and adult size tricycle to work.  There's no sign and it takes years to get a reservation.  Tell that to The French Laundry.  Her motto is "Simple Life, You Happy".  National Geographic called the Skylight Inn of Ayden, North Carolina the barbecue capital of the world in 1984.  It's also in the middle of nowhere but has a ridiculous rotunda atop its simple brick building attesting it's fame.  These people love their food and do it proud.  It's not about money for them, it's pure love.

Some of the characters highlighted a particular food or drink like the energetic, sixtyish man grinning ear to ear who lauds the merits of buttermilk.  Why is he so giddy about buttermilk? He declares with total sincerity, buttermilk to be the elixir of youth.  "It keeps you young!  Why buttermilk could put Viagra out of business.  It'll make you embarrass yourself you feel so young."  Wink, wink.  I'm surprised dairies aren't using his testimonial for marketing.  Can you imagine? "Drink our buttermilk to rev up your sex life" or "A glass of our cold buttermilk makes you hot." I doubt the demand for buttermilk could be met if Madison Avenue got wind of this.

The man who spoke to me like a sole mate raises grass fed cattle in Georgia and the scene is set in his pasture.  He says he starts every day at dawn and surveys his pastures with a big cup of coffee and ends everyday at sunset in the same spot with "a 720ml glass of wine" (that's a full bottle). It shows him taking a big swig straight from the bottle.  "I don't much care what I have to do between those two events, but if I miss either one - it just ticks me off!"  He means it, too. I get it.  I can't handle a full bottle but a glass is nice.  A night of rest and cup of coffee in the morning assures I can face the day.  My mind is scattered in the morning like clothes carelessly dropped on the floor.  Coffee helps me sort and organize my thoughts and tasks for the day.  The clothes get mentally picked up and hung up.  At the other end of the day, wine takes the edge off the bumps and bruises.  Rituals for the beginning and end of the day are essential and quite human.  It may start at Starbucks and end at a pub or it could be in a pasture.  It's a hallmark of civilized society in my opinion.

I like the idea of being part of a tradition.  My parents set that example as family meals were part of our daily ritual.  It didn't matter if I got up at noon, I had to eat breakfast before lunch.  You didn't get meals out of order in our house and you didn't have so much as a peanut butter cracker without china and silverware.  Christmas Eve was an epic event I've found challenging to reproduce but the gathering of family is still essential.  Our Father's Day barbecue sauce competition is more my speed.    Food brings people together to survive and thrive.

I'm always looking for the next big thing in food but looking at my own turf is pretty complex and compelling, in this case.  Food is central to this region's character.  It seems to me contemporary cooking has gotten confused and trendy with an "anything goes" attitude so I appreciate SFA for examining the traditions of a regions foodways that have endured and documenting the ever changing South through the foods we eat.  The world is getting small but the table is getting bigger.

Posted by Recipes & Random Thoughts at 4:45 AM No comments: 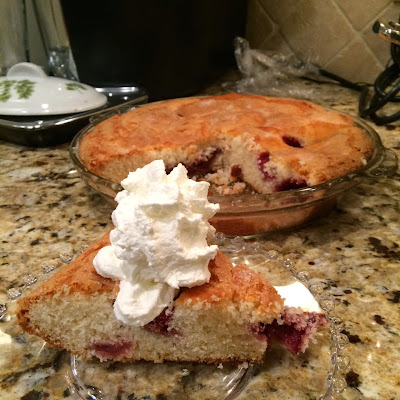 Memorial Day weekend signals the beginning of summer.  Everyone has shed their coat and tie for shorts and T-shirts, stilettos for flip flops and headed for the beach or lake in droves. We're ready for relaxed, easy entertaining and menus. Things that don't take much time and effort but make that "summer is here" statement.  This delightful and simple strawberry cake fits the bill.  It's modestly adapted from Martha Stewart and Jenn Segal's version.

Preheat oven to 350 and butter a 9 inch deep dish pie plate or cake pan (round or square).

Mix the first three ingredients in a medium bowl.  In a mixing bowl, beat the butter and sugar together until light and fluffy.  Add the egg and beat to incorporate. Add the flour mixture and liquids alternately in three portions and beat until smooth.  The batter will be fairly thick.

Pour into greased pie plate and top with halved strawberries. Don't press the berries down in the batter.  Sprinkle 2 tbls sugar over the berries and batter to form a crisp topping while baking.

Bake at 350 for 10 minutes, then reduce heat to 325 and continue baking for 50 minutes or when the top is browned and a tooth pick inserted in the middle comes out clean.  Cool in the pie plate and serve with whipped cream or ice cream. Serves 6-8.
Posted by Recipes & Random Thoughts at 4:37 AM No comments: 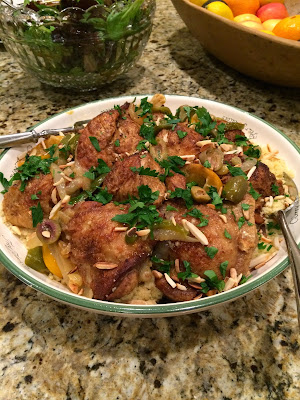 Never try something new on dinner guests.  Well, I did anyway.  I knew this group could handle a little risk. There's no set formula for this dish but there are essentials.  I was thinking Moroccan chicken should have a complex, exotic flavor and pungent aroma.  There are a good many spices to incorporate along with garlic, onion, lemon and olives.  I'd tried the spice blend on a roast whole chicken earlier and thought I'd give the tagine dish a go. The final analysis was it needed more heat and, despite the olives, more salt to bring out all the flavors I wanted.

I was not able to locate the more traditional preserved lemons (lemons preserved in salt) often used in this dish. I grilled slices of Meyer lemons instead.  Most recipes I consulted had a modest amount of added salt so I assumed the olives or preserved lemons would take up the slack. I marinated the chicken pieces in the spices mixed with olive oil and garlic in a zip lock bag.  I do not add salt to the marinade because it makes the chicken tough. I sprinkle on just before browning the chicken.  I also removed the ribs from the chicken breast and left the skin on, then cut the breast across the middle.  It browns beautifully and the skin doesn't get flabby when braised.  This makes for uniform serving pieces and even cooking.  If you do not have a boning knife, ask you butcher to remove the ribs.  It only takes a few minutes.  I went back to the lab, made some adjustments and this is the final results.  I used my Le Creuset braiser in absence of an actual tagine cooker.  It works fine and creates flavorful, tender chicken. A lovely meal for a spring evening.  Serves 6-8.

3 chicken breasts, skin on, ribs removed and cut across the widest part to make 6 pieces
4 chicken thighs, skin on

Add chicken pieces and mix to coat. Refrigerate at least 4 hours or over night turning at least once. Remove from marinade, drain on a rack and sprinkle on both sides with Kosher salt and fresh cracked pepper. Save the marinade.

While the chicken marinates, slice two Meyer Lemons and brush each slice with olive oil on both sides.  Grill on a grill pan for 3-4 minutes per side until just browned. Remove and set aside. 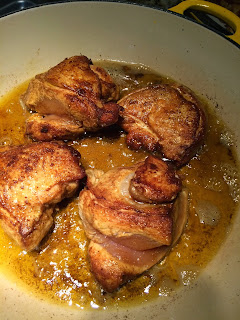 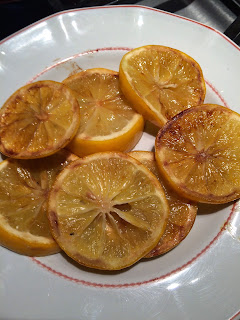 Heat 2 tbls olive oil in heavy braising dish and brown chicken pieces in batches, skin side down, first.  Brown each side about 5 minutes.  Remove to a platter and tent with foil. Drain off all but 2 tbls fat. 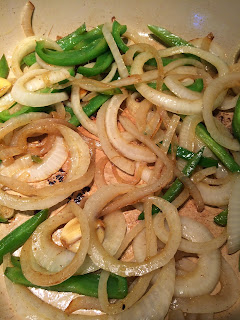 Add 1 large onion sliced and 1 green pepper sliced into strips.  Cook over medium heat until the edges just begin to brown.  Add reserved garlic and cook another minute. Add chicken pieces back to pan with 2/3 cup chicken stock mixed with reserved marinade.  The liquid should come up about 1/2 way - not cover the chicken. Tuck the grilled lemon slices and 1 cup cracked, halved, pitted Greek olives around the chicken pieces and cover with lid. Place in a 350 degree oven for 45 minutes.  Remove from oven, uncover and arrange chicken, vegetables, lemons and olives over couscous (prepared with chicken stock and 1/3 cup currents).  Heat the juices on high heat and reduce until reduced by half and thickened (4-5 mins).  Adjust the seasoning, then pour over chicken and couscous.  Garnish with toasted slivered almonds and chopped flat leaf parsley or cilantro.

Posted by Recipes & Random Thoughts at 3:05 PM No comments: