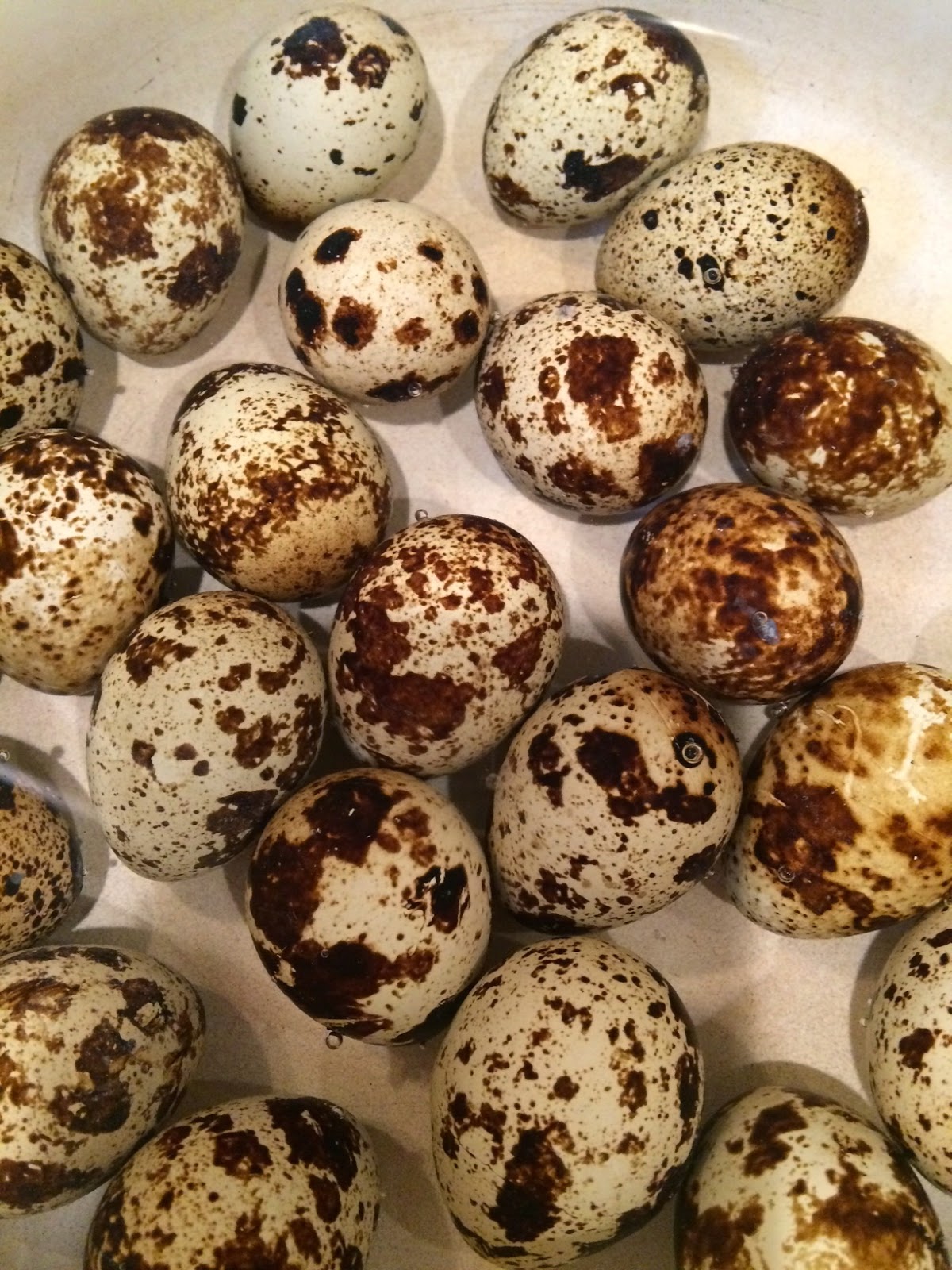 A large jar of pickled eggs used to sit on the bar of the popular dive where we drank $2 beer in our younger days.  It was smoky, only served beer and blue jeans where the dress code.  The nasty pickled eggs where the only food offered in the establishment, except for some bagged pretzels.  I never saw anyone eat an egg or the jar move from its' position on the bar - ever.  It just sat there like a figurine in grandma's house, the glass cloudy from years in a smoky environment.  It was the icon of just how low the ambiance of the establishment was and I could never conjure a coherent thought that these eggs where consumable.

I've been prejudiced about them all these years until I was offered a quail egg as a nibble with cocktails.  The bite size eggs, simply served with celery salt and their rich, buttery taste, due to their larger yolk to white ratio, seemed quite delectable and chic. You think about slim women sipping dry Martinis and wearing Manolo Blaniks when you eat these petit bites.  I've been thinking about them for some time and decided to revive the pickled idea for these little gems.  I like a hot and sweet flavor and they make an elegant canapé when matched with shrimp or smoked salmon.

This is a simple pickling brine and some might choose to add beet juice to color the eggs of devil them but I like them whole and the simplicity of this recipe. 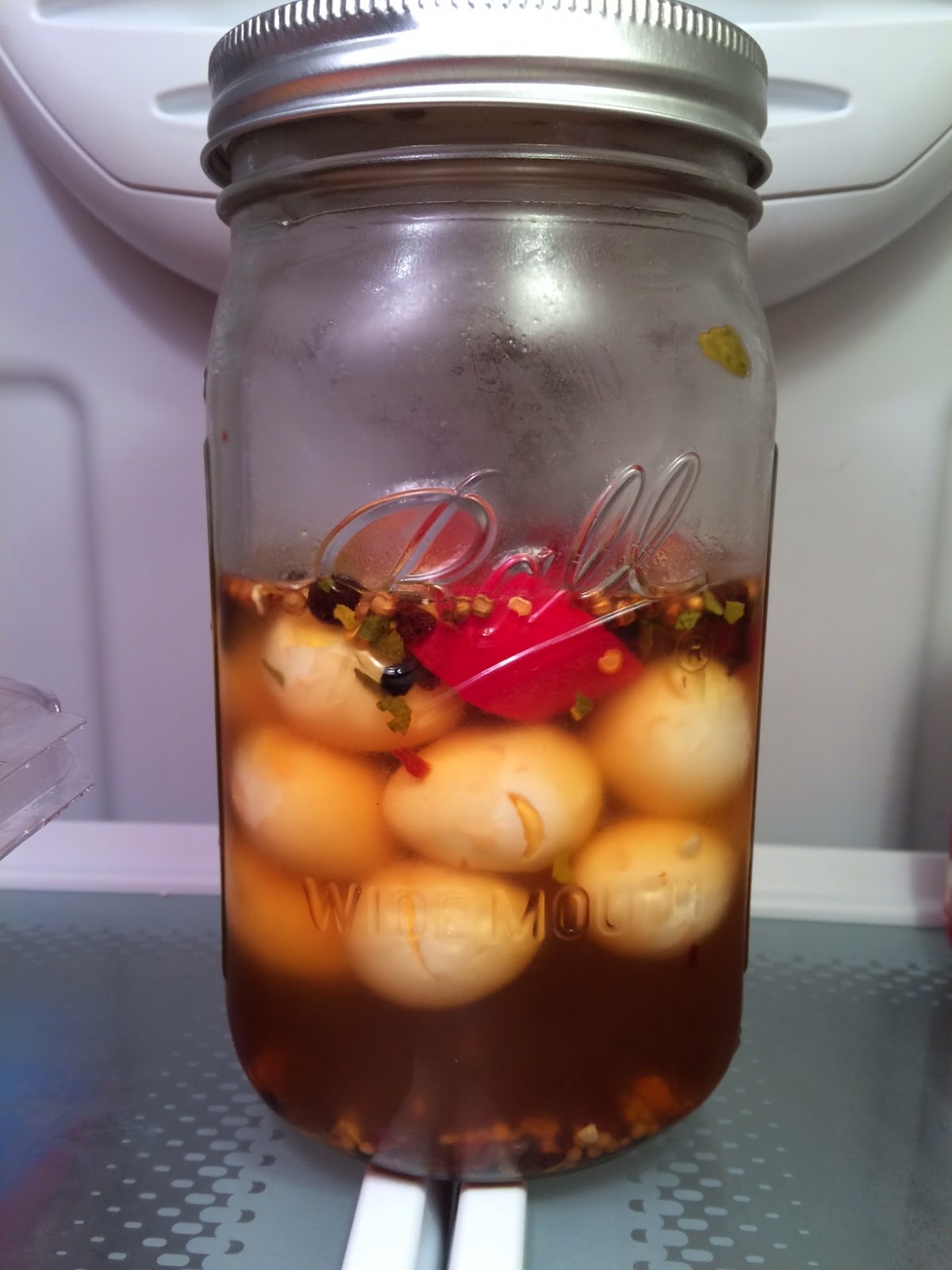 Combine the first 3 ingredients until sugar is dissolved in a sterile jar.  Add the remaining items and then the peeled quail eggs.  Cover and refrigerate for at least 24 hours.
Keep refrigerated up to 5 days. 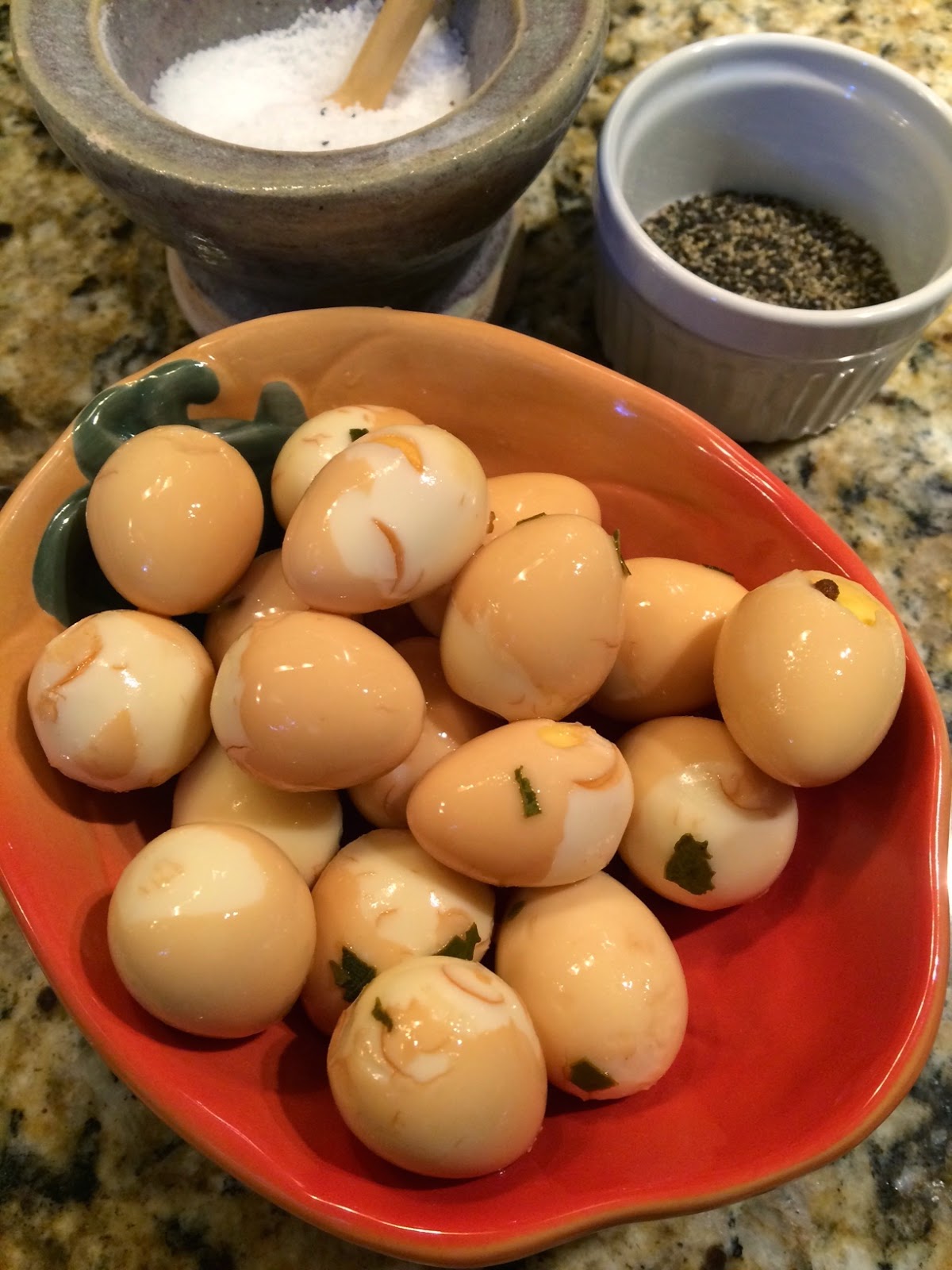 Posted by Recipes & Random Thoughts at 4:00 PM No comments:

Email ThisBlogThis!Share to TwitterShare to FacebookShare to Pinterest
Labels: Appetizers 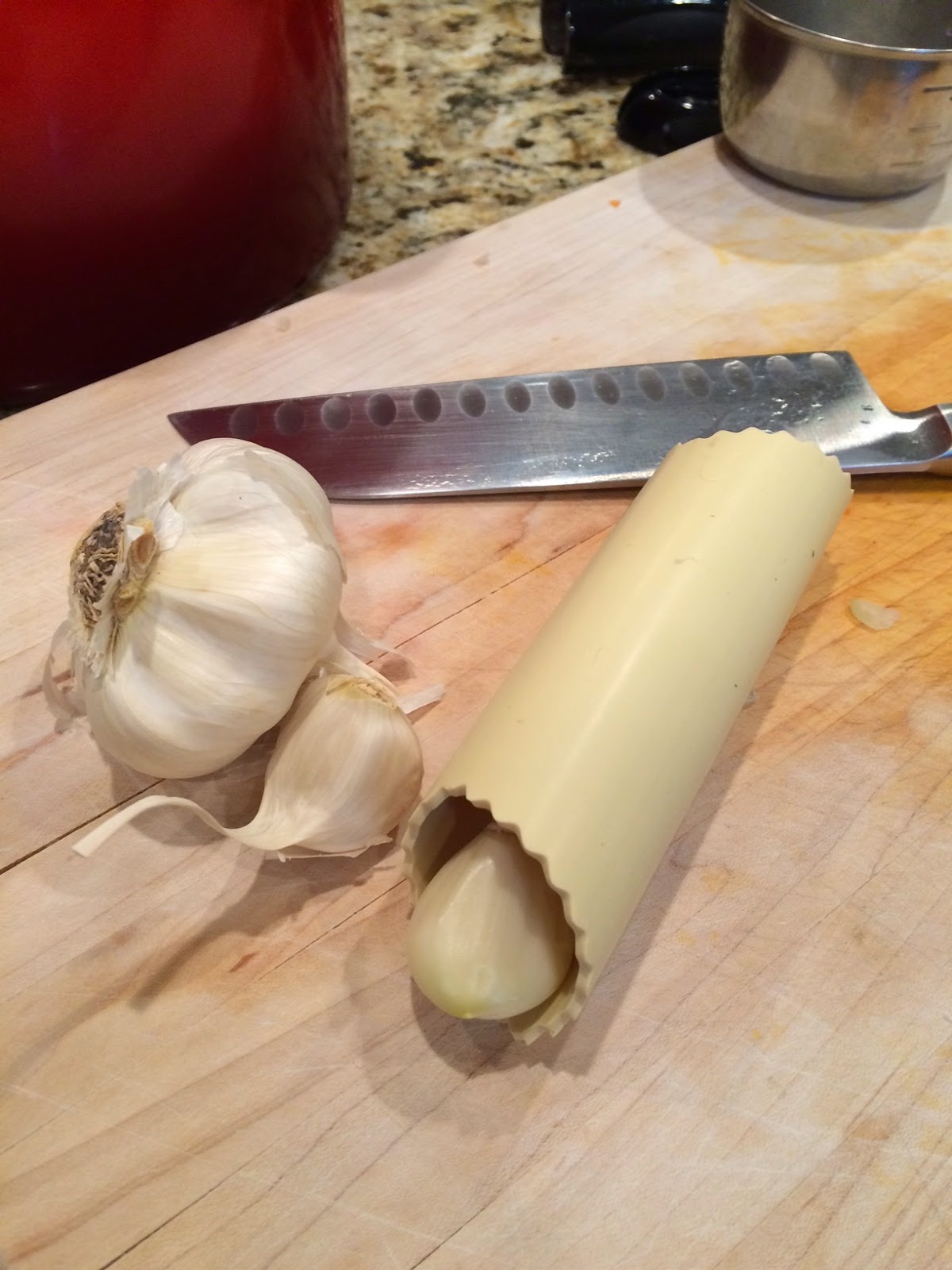 Some time ago, my husband handed me a small wrapped package when he came home from work.  "Robert came by the office and said to give you this."  No further explanation; I had no idea what it was but when I opened the wrapping to see a 5 inch piece of flexible plastic tubing, it occurred to me this was the garlic peeler Robert had described after I'd whined about how much trouble I thought garlic prep was.  I must have sounded like a woman with chipped nail polish or mascara that smudges to him but he saw my need for enlightenment and responded immediately.  Compassion without judgement.

Peeling garlic is one of those tedious but necessary skills in food preparation.  It's part of the "mise en place" I go through in organizing ingredients for numerous dishes.  Garlic is extraordinarily flavorful and even has health benefits so it's important to find an efficient way to peel off the paper like skin of those pesky little cloves without expending too much time and effort.  Like chopping onions that make you cry or peeling shrimp, you are always looking for a better way to do it.

I've employed the "nip and pick" method. Using a small knife, nip off the root end and carefully peel away the skin.  This works ok if the garlic isn't very fresh and the skin has separated slightly from the clove flesh as it dehydrates.  You might opt to do this for a single clove but it gets pretty frustrating if you have more.

There's the more aggressive method by smashing a clove under the flat side of a knife blade and then popping it with your fist quickly.  Be sure the sharp side of the blade is turned away from you. The skin is immediately separated from the flesh but the clove is smushed depending on the violence of your blow. You can still mince but it's somewhat mangled.  I use this when I want garlic to infuse oil or vinegar because it's juice is somewhat expressed from the pressure.

If you need a good number of cloves peeled, there's the ridiculous, primitive shaking method I first saw on Rachel Ray's program.  Separate the entire pod and put all the individual cloves into a small metal bowl and cover with another inverted bowl, holding the two together, shake vigorously.  All the cloves banging around is suppose to beat the skins off. This might peel a few and loosen up the rest but it really doesn't work very well.

Quickly blanching in boiling water is another option to loosen skins but you still have to manually remove those papery skins.  You may lose some flavor and texture here too.

Finally, you can buy whole jars and containers of processed peeled garlic.  I don't even want to think how they did that, do you?

The simple gadget Robert gave me makes the task nearly effortless. It's inexpensive, never wears out or needs repair and is available in many stores.  I think I ignored it before because it was too simple.  Just insert the clove in the tube, roll it back and forth on the counter under mild pressure with your palm and you have an unblemished garlic clove free of its skin.  Who else but an architect and graduate from engineering school would have the best device.  A serious foodie who was worthy of membership in France's Conferie des Diamants Noir (The Fraternity of Black Truffles), I took anything he said to heart and was touched he'd taken the time to procure this for me.

Last week, we went to his bedside to say goodbye just days before he passed away.  He was too weak to say much but smiled when I thanked him again for the life changing garlic peeler.  Aside from making the task easier, it was his encouragement I appreciated more.  He was superior in knowledge and skill but generously shared his enthusiasm for food with me.  I've pictured above my two favorite kitchen tools; the peeler and my knife. They're like family jewels to me - but Robert was the real gem.

Posted by Recipes & Random Thoughts at 6:39 PM No comments: 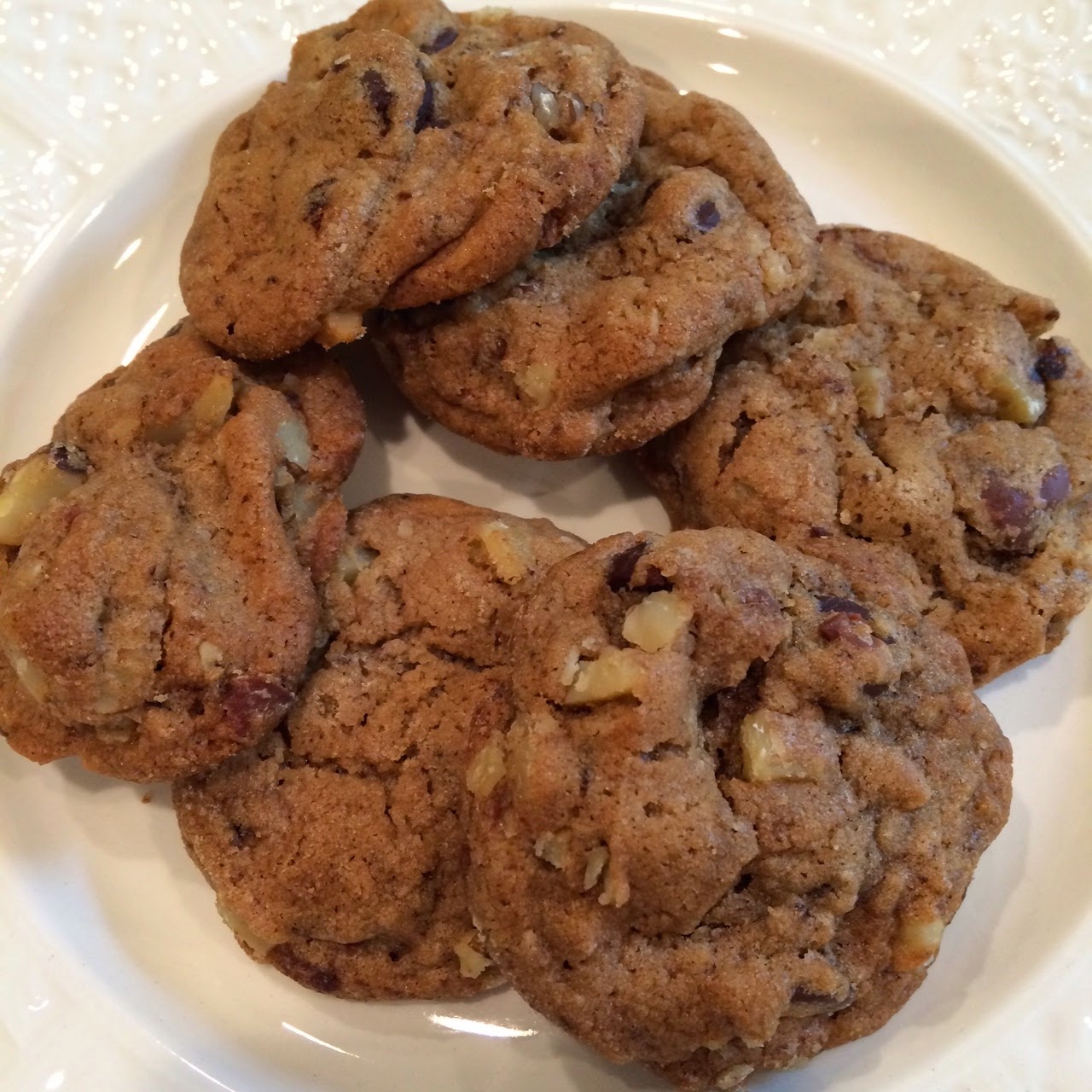 I now have the trifecta of cookie recipes.  The sugar cookie, the ginger bread cookie and now the ultimate chocolate chip cookie.  The trick is a little instant coffee granules and a shot of cinnamon.  I also like the mix of semi-sweet and milk chocolate chips.  A sweet neighbor brought these on Valentines and I was so impressed I called for the recipe.  Every batch has gotten raves and pleas for the recipe, so here it is:

Drop dough by rounded tablespoons ( I used a small, melon ball size spring loaded scoop) on cookie sheet covered with parchment paper, spacing 2 inches apart.  Do not flatten dough.  Bake 12-14
minutes until just beginning to brown but still somewhat soft.  Cool on sheets.  can be frozen or stored airtight at room temperature 2 days ahead.
Posted by Recipes & Random Thoughts at 1:38 PM No comments: