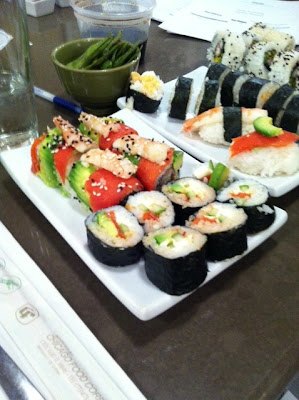 I found myself in a sushi restaurant a month ago with my son, his fiancee' and assorted friends.  The place was packed and ripe with energy.  The fiancee' took charge and ordered with savvy authority. I was clueless. I've always written sushi off as a fad even though it's  obviously mainstream and readily available in my grocery store. I've been in denial, ignored its intriguing flavors and art.  Am I set in my ways?  An old fogy? It was clearly time to get with it and learn something new, so I signed up for the basics of this popular cuisine.

The instructor informed us sushi chefs spend 5 to 6 years learning about rice and its preparation.  We were going to use a rice cooker and have ours ready in 25 minutes.  OK by me.  Cooked sushi rice is sticky but the real trick is its' dressing of rice wine vinegar and sugar.  I was surprised about the sugar.  Then we did our mise en place, slicing, chopping and so forth; cucumber, yellow pepper, green onion, avocado, asparagus and cream cheese followed by tuna, smoked salmon, shrimp, eel and crab meat.  She reviewed the condiments next. A whole new syllabus of ingredients which bring on the flavor for the subtle fish and rice.  Next was the rolling technique, which is a matter of practice.

We sliced and plated then sat down to sample our sushi.  Mine looked OK but was timid on flavor and my sushi etiquette was downright offensive.  You are not suppose to put the pickled ginger on the sushi roll.  I dipped all wrong and I won't discuss my chopstick management.  There was some leftover tuna dressed with Japanese mayonnaise and other condiments which some devoured the way I would ice cream.  That's when it hit me,  they really like raw fish!  So I posed the question to my class mates, "Why do you like sushi?"  They like the spicy flavor but the answer that impressed me most was, it's "clean and fresh".  Unlike the organic movement, sushi bears its own brand of purity complimented by unique condiments.  It must be fresh, there is no option.  Sushi is art as well, the Japanese eat with their eyes first so it's presentation is organized, colorful and provoking.

I haven't decided if I want to put sushi in my home cooking repertoire but I certainly found a new appreciation for it and hopefully made points with my future daughter-in-law.  Sushi is here to stay in the same way Mexican arrived on my parents table with reluctance.  The world is getting smaller but it's table is getting larger.  Grab a seat.


Posted by Recipes & Random Thoughts at 7:01 AM