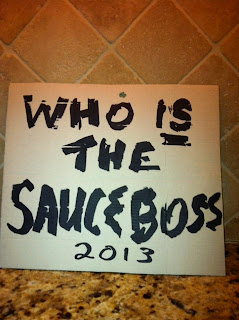 I am the Sauce Boss 2013! I finally won our annual Father's Day barbecue sauce competition after being beaten in past years by my spouse and daughter-in-law, I came up with the winning recipe, but only after a taste off against my sister-in-law.  It was close, I tell you.  I'd tried a vinegar base, mustard base and a sweet concoction, but none were popular enough to win in the past, so I figured you have to play to the audience with a ketchup based blend and a balance of everything - sweet, smokey, tangy and the right amount of heat.  Mine isn't tricked up with bourbon, coffee or fruit juice but it did have a very *secret ingredient that no one else had access to. Just a little of the drippings of the pork butt I personally seasoned with dry rub and smoked with hickory.  It's the same principal I use when I save the "essence" of a roast chicken. I chill the excess juices, skim off the fat and freeze it to later flavor sauces and gravy.  After smoking the pork, I use most of the defatted drippings to keep the meat moist after the shredding or pulling part.  There's plenty left over to save for flavoring and it's a heap better than liquid smoke. It's the color of coffee and when chilled, assumes a gelatinous consistency and can be frozen for future use.

Here's my sauce recipe.  It's fine without the the *secret ingredient but better if you have access to those rich meat juices and it doesn't take much.

Cook several slices of the bacon until crisp and drain on paper towels.  Crumble one slice into bits. Cook the onion in 1 tbls of the bacon drippings until just golden and set aside. Combine with the remaining ingredients in a nonreactive sauce pan and simmer 10 mins on low heat.  Add the bacon bits and the *secret ingredient it you have some.  Makes about a pint.

Tip: Use the rest of the bacon in baked beans and add a little of the this sauce to make them extra good.

Posted by Recipes & Random Thoughts at 10:48 AM

Email ThisBlogThis!Share to TwitterShare to FacebookShare to Pinterest
Labels: Sauces