The Greatest of Feasts - The French Baguette, Simplified

James Beard declared bread the most satisfying and with butter the greatest of feasts. Agreed. 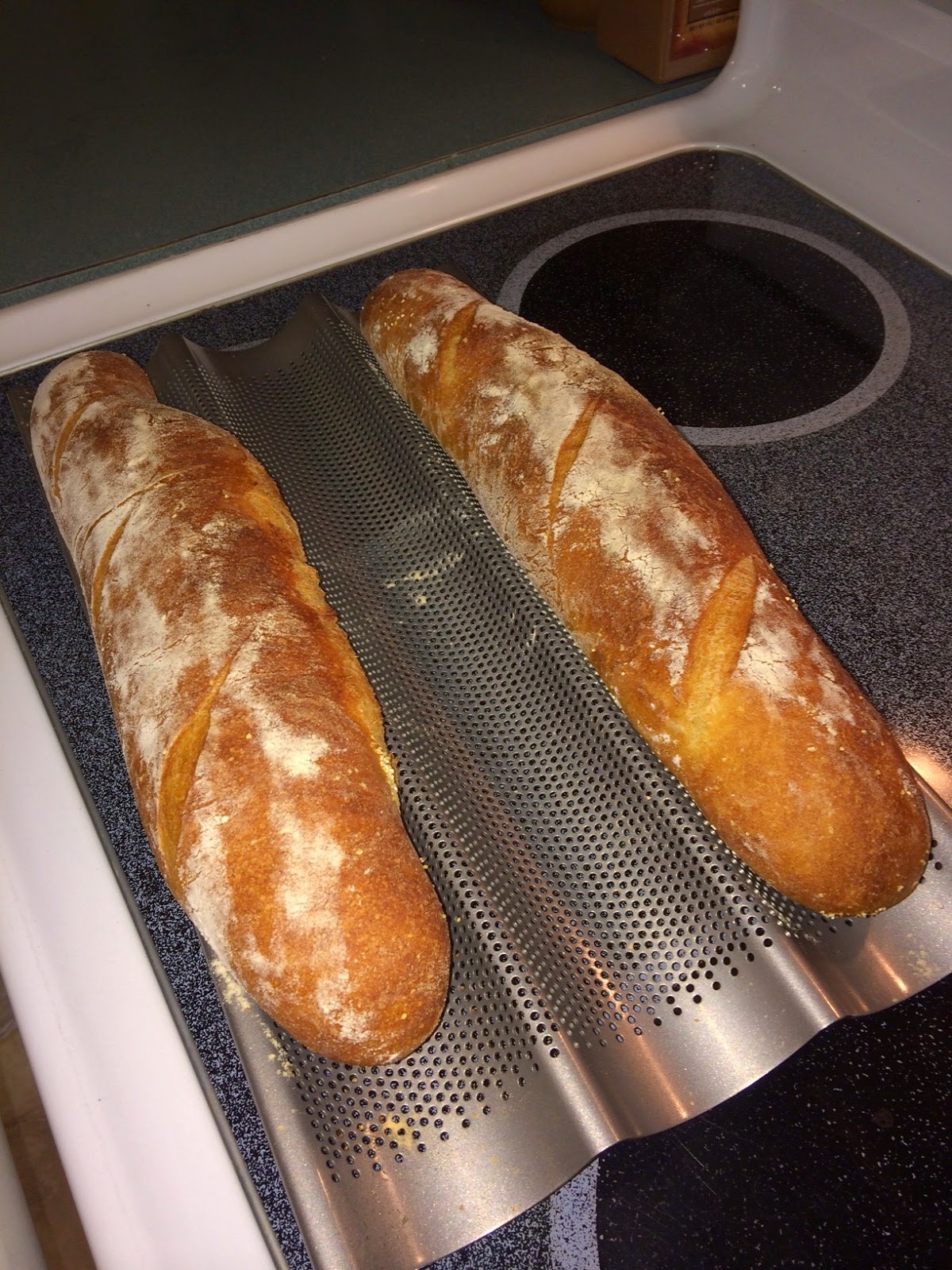 There are countless forms of bread throughout history and the story of bread begins with the dawn of agriculture.  Bread is eaten at any meal and in between.  It has both social and emotional significance beyond nutrition and is prized for its taste and aroma which renders it an art.  My personal favorite is the baguette.  The translation is "wand" because of its elongated shape.  What we now think of as a French baguette really only dates from 1920 when a law was passed in France forbidding commercial baking between the hours of 10 p.m. and 4 a.m.  They had to think of a different shape to bake quicker for breakfast.  Originally baked in steam injected brick ovens, a substantial classic took shape.

A good French baguette is my favorite and imagine the goose bumps when I discovered my sister-in -law knew how to make a perfect one.  Let me roll back 20+ years to my one and only attempt to make a baguette before now.  It was a "belly flop" on New Years Eve.  Good intentions but you could have broken a tooth on it.  I put the idea aside until now.

Beth, my sister-in-law, is a fabulous baker with flour in her veins, a real miller's daughter.  Her 92 year old dad is still sharp as a tack and I interviewed him recently about the art of flour milling.  Growing up in Depression Era Kansas, his father owned a mill and feed store giving him first hand knowledge of milling from youth.  He went on to Kansas State's processing school with a back ground in mechanical engineering.  He has traveled the world as an expert in manufacturing flour efficiently, technically and economically as possible.  The Pacific Rim, Australia, India, Japan, Taiwan, Egypt, Albania, Canada, Mexico, Chile and Venezuela are some of the foreign countries that have benefited from his expertise.  If your think about it; he's helped feed the world. He retired in 1988.

He answered my questions about different kinds of wheat but, I had to ask him about gluten free popularity.  He summed it up neatly without judgement.  "It is a condition developed like allergies to peanuts."  OK, I can live with it now but thankfully don't have the condition.

Now, about the French Baguette.  If I can, you can.  This is a simple, no-knead method that produces two 16 inch "wands" with a crusty exterior and just enough chewy interior.  I think the results are impressive.

In a large bowl combine; 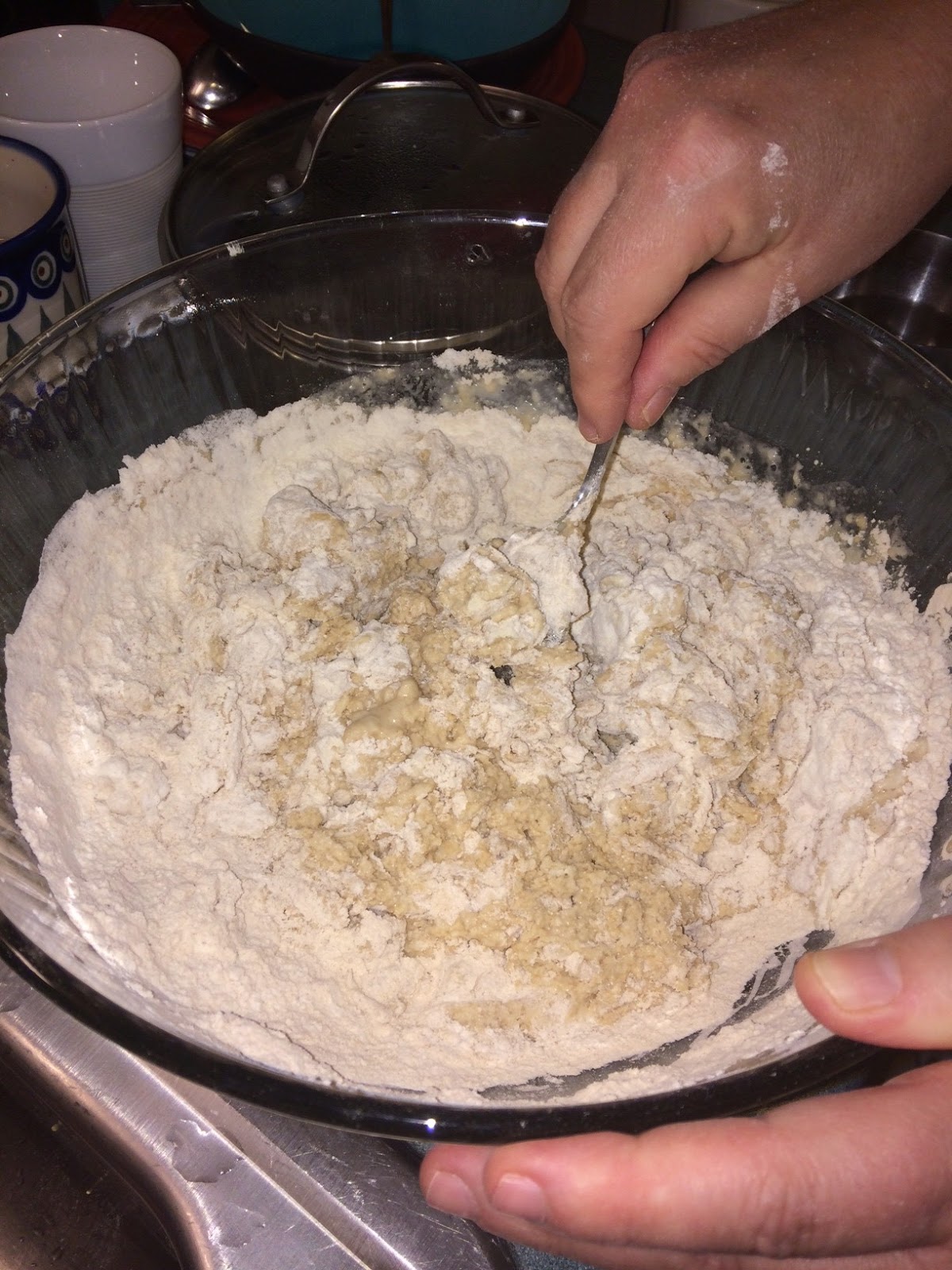 Mix with a wooden spoon or spatula until all the dry is incorporated. Cover loosely with plastic wrap and let rise 18-24 hours.  The longer it rises the lighter it will be. 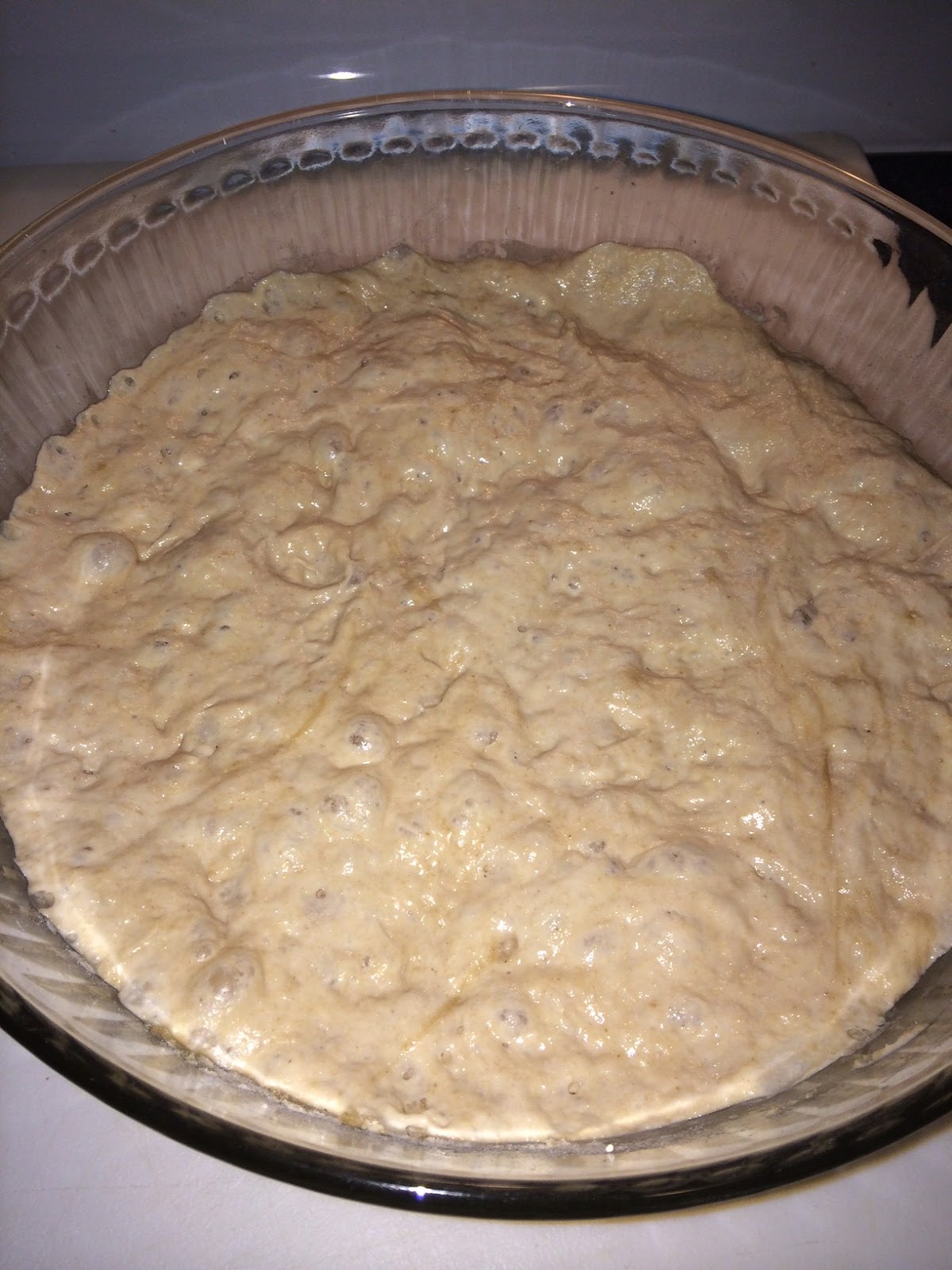 Turn dough out onto a well floured surface.  It will be fairly sticky.  Add enough additional flour to make a smooth elastic ball (about 1/2 cup).  Spread 1/4 cup of corn meal in a line across the top of the surface.  Cut dough into two even pieces and shape each into an 8x16 inch rectangle stretching the dough with a rolling pin rolling in one direction, not back and forth.  Roll the dough up tightly beginning at the bottom edge and pinch to seal. Tuck the ends under and roll slightly with hands to elongate to 16 inch length. Smooth the underside seam with a finger dipped in water and lightly press into corn meal. Spray a baguette pan with nonstick cooking spray and arrange baguettes in the wells of the pan so they do not touch

Rinse a tea towel under luke warm water and wring out thoroughly.  Place over baguettes and let rise for 45 minutes to an hour until double in size.  Place a pan of water on the bottom rack of an oven and position a second rack in the middle over the pan of water.  Heat the oven to 450 degrees.


Just before placing in the oven, slash each loaf with a sharp knife 3 times.  Bake over the pan of water for 25 minutes on the middle rack. 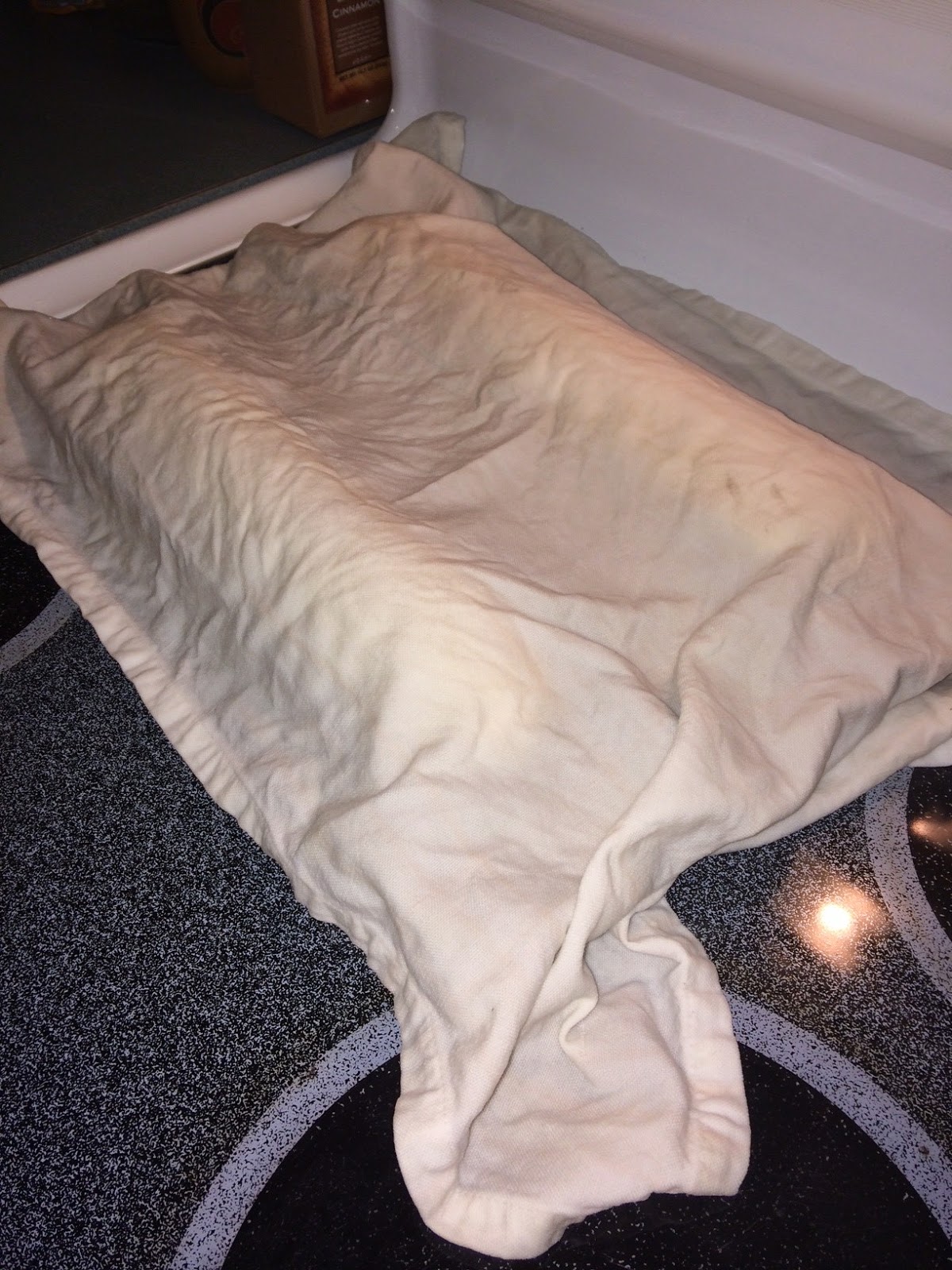 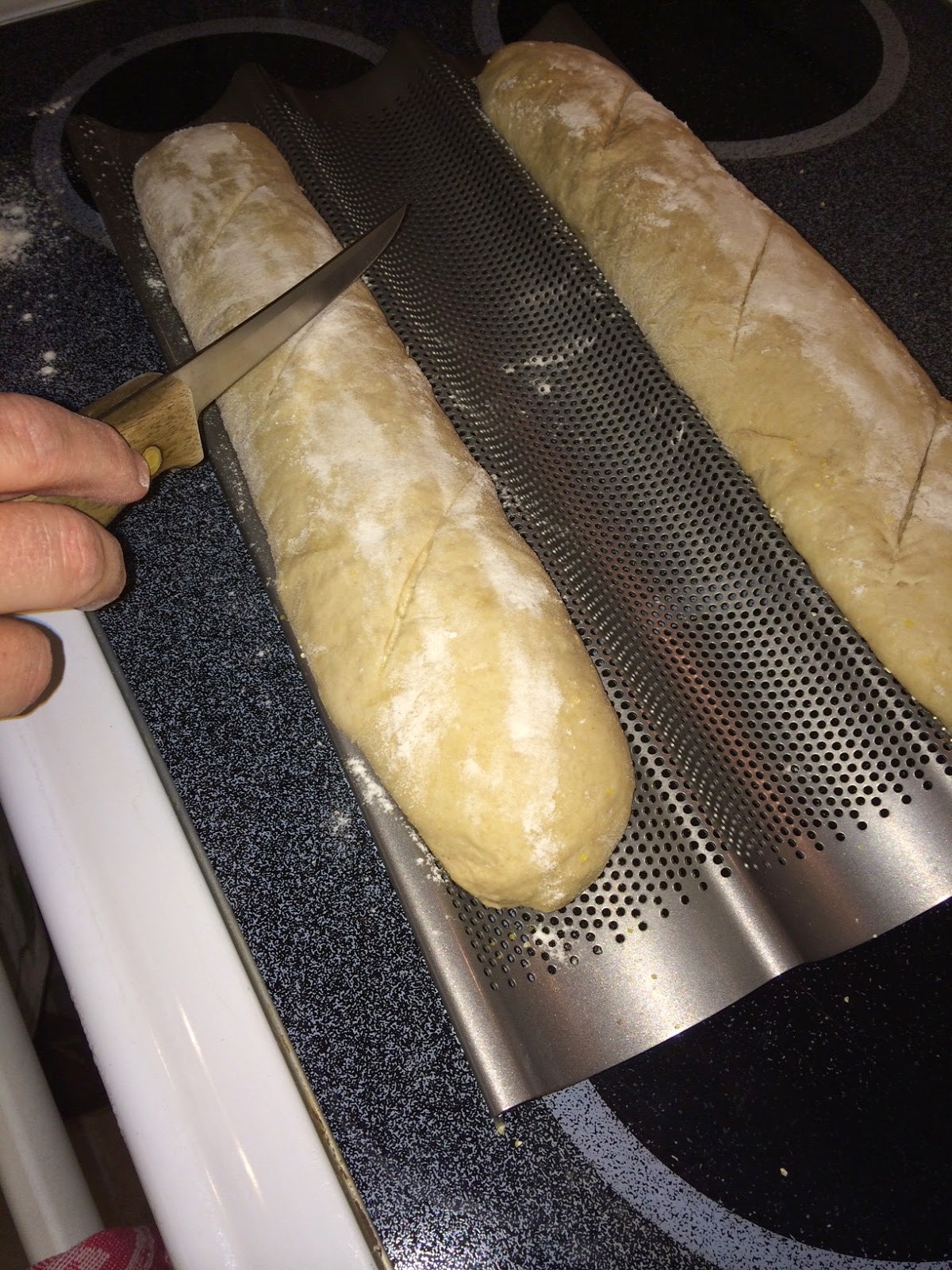 Email ThisBlogThis!Share to TwitterShare to FacebookShare to Pinterest
Labels: Bread