I knew it when I came in from play at the neighbor's house.  Daddy's car was missing and the kitchen was dark and quiet.  There was no sign of dinner except for the little red light on the oven.  Then my mother appeared in her slip with rollers in her hair.  That was it, they where going out and I would be left at home with a baby-sitter.  Daddy had gone to pick up some dried up spinster or widow Mother had spied at church.  My Mother  took the dreaded tuna noodle casserole from the oven and said I could eat on the rug in front of the den TV and watch Flintstones and Jetsons if I didn't spill anything and added I could stay up until 10.  Then she vanished to her bedroom to finish dressing, painting her eyelids in peacock blue eyeshadow, dowsing herself in Bal de Versaille perfume and donning high heals and rhinestone earrings.  I never had one of the many teenage baby-sitters in our neighborhood who brought the Elvis or Buddy Holly records, played with your Barbie and giggled on the phone with a boy.  Oh no! Just the retired missionary or elderly Sunday school helper who couldn't even play Pick up Sticks or draw with crayons.  So I sat sulking in front of the TV, picking at the dreaded tuna noodle casserole so many woman found miraculous  in the Campbell Soups advertisements in Ladies Home Journal.  Boiled spaghetti, a can of tuna, a can of cream of mushrooms soup topped with cheese.  Need I say more?  I ignored the babysitter as much as possible and watched TV until she nodded off.  Then snuck to my parents bedroom to try and refashion myself after mother's hair and make up and spill a lot of perfume all over me.  The baby-sitter and I rarely spoke.  I brushed my teeth and went to bed quietly just to avoid them. 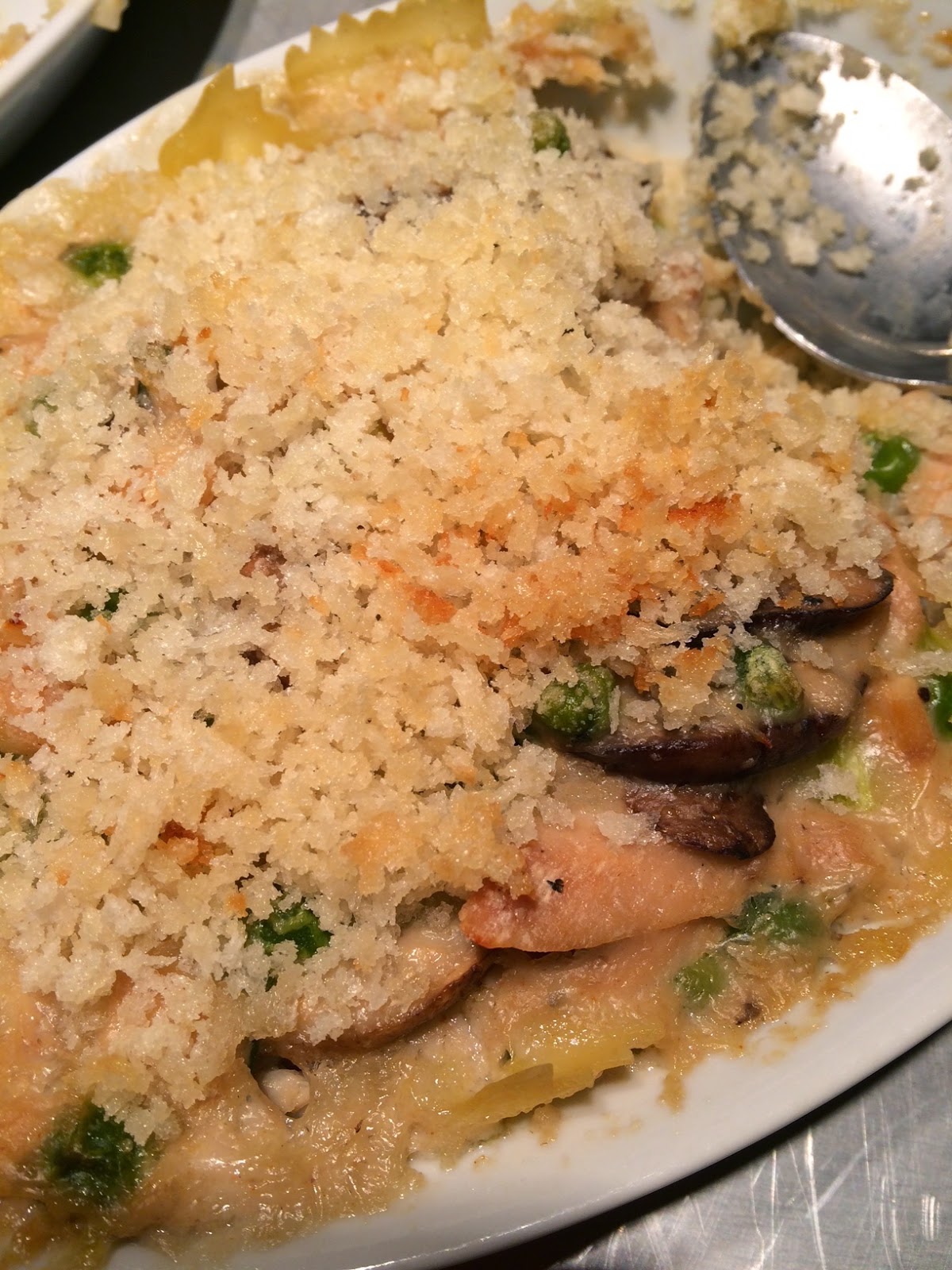 Eventually, the golden arches showed up in my town and drive thru replaced the DTNC (dreaded tuna noodle casserole).  Daddy called McDonalds the tomain tavern and told me I'd have pimples if I continued to eat French fries and milk shakes.  So what?  I loved the action as much as the food and my mother sure wasn't opposed to it.  The teenagers and college students where there and it was as close an encounter as I could get with their heavenly world for the time being.

So why should I try and redeem that loathsome DTNC? Just call me sentimental or I like a challenge.
Sunday night is typically a one pot meal at my house and this fits the bill.  You'll have to open a can of tuna but not a can of soup.  I have to admit I had leftover broth from a scallop dish that really helped flavor this but clam juice is a decent substitute.

Melt the butter and sauté the mushrooms until soft and they release moisture.  Add the sliced green onion and cook 2 more minutes.  Add the flour and combine.  Add the milk and clam juice slowly to make a thick sauce. Season with salt and pepper and add the sherry and frozen peas.  Butter ramekins or casserole and  spread the Farfalle evenly on the bottom.  Pour the tuna mixture over the pasta and top with Parmesan.  Bake for 30 minutes and top with the buttered Panko. Bake 5-10 more minutes until golden.
Posted by Recipes & Random Thoughts at 4:39 AM