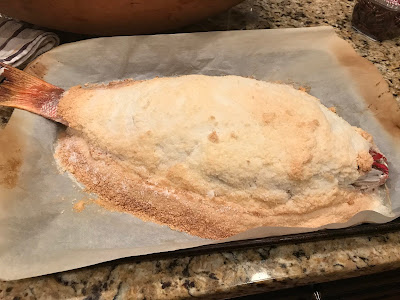 I had watched this preparation of whole fish a couple of times by Martha Stewart and Sara Moulton and found it intriguing.  I recall ordering a whole herb stuffed Branzino in Italy and forgotten they present the whole fish to the dining patron then remove it to be filleted by the server.  There's a formality and ceremony about this and, without thinking, picked up my knife and fork to tackle the task myself.  The waiter swooped in to rescue the fish from my butchery and probably muttered something under his breath about stupid Americans.

The salt crust is even more dramatic as the cracking of the crust reveals a whole fish with some flourish.  Brush away the excess salt, then carefully peel back the skin to reveal silky, moist flesh  perfectly seasoned.  It's struck me as a great company entree that had a "ta da" moment to it.  I practiced on a striped bass and then a Branzino before purchasing a near 6 pound snapper.  The fish monger trimmed off the fins, scaled, gutter and gilled the fish. The snapper didn't have as big a cavity for stuffing because of a bone but it was tasty anyway.  It's not too hard to do but try a smaller fish like trout first.  If you want a dish that impresses, try this.  The drawback, may be the pin bones depending on the fish, so warn your guest and pick out as many as you can before serving.  The Branzino had too many, the large snapper had more flesh, less bone.

All it takes is a box of kosher salt and egg whites. Use 1 cup of salt and one egg white per pound of whole fish, remembering you will lose half the fish's weight to waste (head, bones, tail).  Cover a baking sheet with parchment paper. Mix the egg whites, salt and any other spices until it feels like wet sand. Add more of either to get the right texture. Rinse the fish under cold water and pat dry. Stuff the cavity with fennel fronds, sliced lemon, leek and  thyme.

Make a half inch bed of salt for the fish after stuffing the cavity, then lay the fish on top of the salt and pack remaining salt mix tightly over the fish leaving just the mouth and tail exposed.  Bake at 400 degrees, 10 minutes to the pound until golden. Remove from the oven and let rest 10-15 minutes. Rap the salt with the back side of a spoon and break away the salt crust.  Brush away the excess salt and carefully peel back the skin. Remove as many pin bones as possible and fillet. Serve with a drizzle of olive oil and squeeze of lemon.  Heaven!
Posted by Recipes & Random Thoughts at 6:20 PM

Email ThisBlogThis!Share to TwitterShare to FacebookShare to Pinterest
Labels: Fish