Last Dinner on the Titanic;The Tip of the Iceberg

There are only two First Class menus recovered from the Titanic for the night of April 14th. Ten courses and a total of twenty four items.  The menu reveals a sumptuous selection of fish, fowl, meat, vegetables and desserts not to mention a wine for each dish.  Just the tip of the iceberg; pun intended. This was the end of the Edwardian era permeated by overindulgence. Living large was in fashion and this enormous, luxurious, fantastic new ship was the stage to exercise wealth and pleasure. Indeed, all the staff and passengers of each class where well fed. Life deluxe is fascinating, isn't it, or is it morbid curiosity?
The 100th anniversary of the sinking of the Titanic is upon us and people are marking the occasion like the millennium. Fascination with this tragedy never ceases and renewed its vigor when the wreckage was found on July 1, 1985.  I suppose the interest with what someone ate before dying began with Christ's Last Supper.  How could anyone swallow so much as a single pea if they knew their death was immanent.  Well these people on the Titanic where clueless, having a jolly time on a floating palace. Eating, drinking and making merry; well, you know how the phrase ends. I guess it's the stark contrast between all that material life could offer and suddenly, Mother Nature crashes the party. Pride before destruction.
I thought I should, at least, cook something from the menu since it's such a hot topic.  It's not hard to find recipes, as a matter of fact, there is a whole book dedicated to this gastronomic finale,The Last Dinner of the Titanic, by Rick Archibald. There are dinners and costumed soirees across the globe this weekend where chefs are researching and recreating this epic final feast.   While, there was everything from oysters to squab on Titanic's First Class Menu, I settled on a single item; the Lamb with Mint Sauce. Lamb roasted on the grill marks the spring/Easter season and mint sauce is a the right balance to the meat's  rich, distinctive flavor.

Alas, I have no appetite for it. 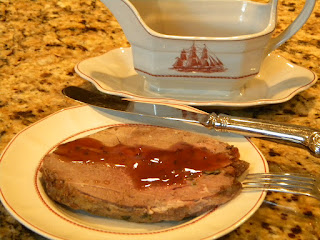 In a heavy nonaluminum sauce pan combine all ingredients except corn starch and reserve the 2 tbls mint.
Simmer over medium heat until sugar is dissolved, about 2 minutes
Set aside to cool and let stand 2 hours.  Strain through a fine mesh strainer. Then wisk strained liquid slowly into the cornstarch. Simmer over low heat about 2 mins. until sauce is clear and starts to thicken.  Add the remaining mint leaves.  Makes about 1 cup.
Posted by Recipes & Random Thoughts at 5:25 PM

Email ThisBlogThis!Share to TwitterShare to FacebookShare to Pinterest
Labels: Meats