The Mystery of Fish Tacos

Recently, on Sunday night, I've been trying to create the best fish taco formula.  I've studied and eaten several versions and considered numerous options.  Fish tacos seem like the perfect casual Sunday night "throw it together" simple, delicious meal.  I've found it surprisingly difficult to meet my own standards.  "Oh, come on!", I can hear you saying, but the truth is, the first time I made these, they where fried and the best thing.  I don't fry much but, boy, these where gooood.  It was informal, standing around in the kitchen with my son and husband, we talked and I fried and then, without thinking about it, I threw together a sauce and slaw in a soft taco shell. Really, really good but one of those unconscious cooking moments that confound you later; can't quite feel the love now.  Don't know how I did it, can't remember, but the grilled version has been my recent focus since it's a healthier option (but fried, ooh, la la). I think, I've got it now for the grilled, but you can tweek with avocado, tomato or mango,etc.  Apparently, it's a "live in the moment" recipe, so make it your own. 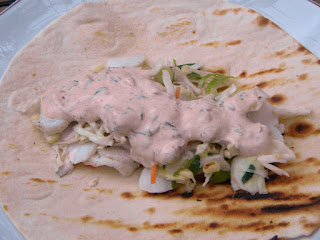 1 lb  white fish such as, cod,  halibut or mahi mahi

Coat the grill grate(charcoal or gas) with oil or nonstick spray (be careful with the spray over flame).Grill over medium heat on each side until the fish turns white, is firm and has nice grill marks.

Brush the ear of corn with canola oil, then season with salt and chili pepper.  Grill and turn every few minutes until lightly browned.  Cool, and cut kernels off with a knife into a medium bowl.  Add the shredded cabbage , sliced green onion and chopped cilantro, then toss.
Brush soft flour tortilla with oil, and grill until marks begin to brown, about 1 minute.  To assemble, layer flaked fish, slaw and sauce.  Fold and enjoy!
Posted by Recipes & Random Thoughts at 4:48 AM