I'm feeling pretty smug today.  I saw it coming and prepared.  I got up early, took care of business, stocked up on groceries and sent my help home early.  I called my husband's office and warned them to little avail.  I was safe at home by noon when the first flake drifted down.  By three o'clock the phone started to ring with bulletins from my family about their progress in the gridlock traffic situation.  My son pulled over and began walking toward his home and was recued by a kind woman headed in his direction.  His wife and one year old son had to walk the last half mile home in snow and frigid temperature.  The news and social media were full of calamity.  I don't know how many times I've seen this happen in Atlanta in my adult life, but we never seem to learn.  My emergency plan of action has been the same for years; stay home and make French Onion Soup.

I first formed this emergency plan in 1979.  I worked downtown in a tall office building and road the public bus transportation to and from my office.  My husband called to tell me the bus service would be discontinued later that day as snow piled up.  The prospect of being stranded at work or somewhere in between was unacceptable to me.  So while everyone else nervously sat at their desks, I calmly put on my coat and walked out.  I didn't make an announcement or ask permission, I just left.  It paid off and I didn't have to appologize.  Common sense ruled the day instead of the dollar. The second part of the plan is French Onion Soup.  It's absolutely necessary for survival if you're snowed in.  It fulfills the warm and cosy part just like a roaring fire.

So when my husband finally pulled in after a 4 hour trip home, the lovely aroma of the soup greeted him.  Better than a kiss tonight. As we enjoyed it he said, "Perfect." 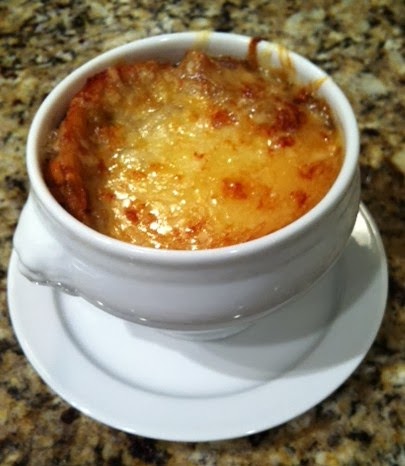 Posted by Recipes & Random Thoughts at 10:23 AM