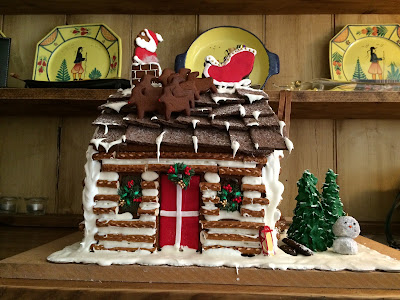 My kitchen is total carnage in the wake of the first gingerbread house I've made in 8 years.  This is not a grocery store kit but a gingerbread house, a' la Martha Stewart , 90's vintage.  I bought  4 templates and instructions in fascination with her catalog; the rest was up to me, I soon learned.  My mother had given me Martha's first Christmas book back in the 80's and I thought at the time, "This woman is insane" but was sucked right in with the decorations and in particular, the decorated cookies and gingerbread house.  I deserve every bit of the punishment it's taken me to admit, I'm a Christmas over achiever.

I swore off gingerbread houses until I had a grandchild who was at least old enough to say "Santa" and it's now time.  I used to knock these craft/culinary feats out every year, buy and wrap the presents, decorate the house and serve 24 for sit down dinner; but one Christmas I woke up at 3 o'clock in the morning very hungry because I hadn't had a bite, I was so busy entertaining.  The worst of it was, I was mad.  I went out to the garage refrigerator and all that was left was the cranberry gelatin mold nobody touched.  Things changed after that year.  Up to that point, I was merely riding in my Mother and Martha's wake.  They set the bar too high for the average person.

Family life ebbs and flows with time and dynamic and now it's time to pull out the gingerbread templates and go back to work at one of the more challenging crafts I've tinkered with.  It's not the best gingerbread house I ever made but it's not the worst.  The roof's a little crooked but that's part of the charm.  It has the poured hot syrup windows that glow when I turn on the battery operated lights, Santa is in the chimney with his the eight tiny reindeer poised on the roof, a snow man in the grove of trees of the yard and a sled propped by the house.  I'm pleased but, Lord it's a lot of work! That said, it should be, it's Christmas after all, so go all out.