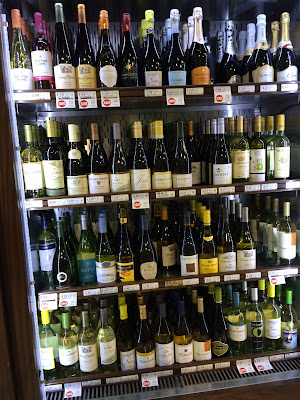 My husband announced he was "going on the wagon" for the month of January as redemption from the holidays.  I thought we did that sort of thing for Lent but he'd read something about a respite from spirits doing wonders for the liver, sort of like spring cleaning or changing the oil in your car.  I blithely took the bait and agreed to join in, there's not much on the social calendar in January and his birthday on the 30th makes it a good ending point.  I'd just shed the extra pounds I'd put on in the last few years testing recipes and thought this was a great opportunity to continue the theme.  Its the first time in memory when I haven't had to consider losing weight at New Year's so I might as well lose the wine to make the reformation complete.
I've really been on the "clean eating" bandwagon whipping up kitchen sink smoothies packed with super foods and baking my Brown Irish Soda bread more often than baguettes.  I've incorporated more Omega-3's and antioxidants into my daily diet and avoided a lot of the things that make cooking intriguing, like butter and sugar.  That isn't to say I haven't strayed now and then but giving up alcohol for a month is a whole other thing.  The rhythm of my life is disturbed a little.  Between the hours of 5 and 7 p.m. I have to be preoccupied with something else but it's not a big deal.  It really isn't hard until the weekend comes around and I feel like the label "special needs" would be noted by my name.   I'm reminded of a friend who's way of offering you a libation was to query, "Could I get you a little personality?"  After sitting through a very pleasant meal with in-laws the first weekend of abstaining, I'm thinking how dull I am.  I doubt I was any more so than usual, it's just that I think I'm more charming after a glass of wine.  That just doesn't happen after a cup of green tea.
I noted Time magazine's recent cover, "The War on Delicious".  That's the best title I've ever read for a food related article.  It's about the campaign against bacon, beef, sugar, sausage, frying, high fructose corn syrup, white flour, processed foods, preservatives and just about anything that makes food taste good in favor of  "clean eating" and "super foods" that rely on their naked flavor and well documented nutritional benefits.  Popular wisdom has us culling from vast media campaigns  and ignoring a good bit of science and statistics which begins by reading food labels.  The food industries have to make their product appealing to the masses versus personal responsibility for what you ingest. That takes a bit more time and thought than super sizing at the drive through.

I'm attending a "reveal" party this weekend.  This is an event where the parents reveal the gender of the baby to family and friends.  It seems like the perfect excuse to give in. The thought of passing on pink champagne or Blue Moon is too much  for me.  I might as well stick a pillow under my shirt and pretend I'm pregnant too.  If only I could ask my liver how things are going and are we cleaned up yet.  I can see that my clothes fit better from weight loss; I can see working out improves my figure and fitness; I can see drinking a quart of water daily helps hydrate my skin; I can see a good night of sleep helps everything but I can't see what's going on inside my insides. 28 days isn't much to ask but I need tangible results like stepping on the scales and finding you're another pound lighter. I just want some evidence this is a worth while sacrifice.

One think for sure, I'll think about this differently before I do it again.  Old habits die hard.
Posted by Recipes & Random Thoughts at 3:17 PM